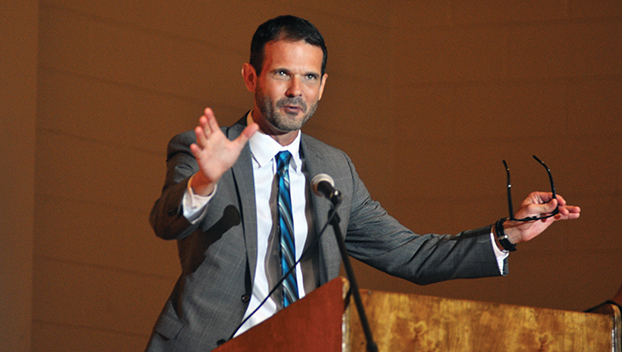 Though they were reluctant to accept the resignation of Superintendent Dr. John Strycker, the Butler County Board of Education did just that last Thursday.

During the regular meeting, Strycker asked to update the personnel report to include his resignation.

Board President Lois Robinson then spoke about Strycker and his leadership.

“Dr. Strycker has accepted a position in Mississippi with a school board and he will leave us effective Jan. 1, 2020,” she said. “His resignation is included in our personnel report and I personally want to say that I’m sorry to see Dr. Strycker go.  I wanted to make mention of that publically.”

The Board voted to approve the resignation with one exception, Michael Nimmer.

Board member Brandon Sellers then spoke about Strycker’s departure.

“Over the last few days since his announcement, I’ve seen our community act in two different ways,” Sellers said. “A lot of love and some act like Dr. Strycker wasn’t from here and maybe it’s just a good idea. I think that some of that goes back to our ad valorem earlier this year that failed. I think the school board has to take ownership of that. As I look out in this room, I see so many things that have been accomplished while Dr. Strycker has been here.”

Sellers cited new employees and programs as he spoke about Strycker’s tenure as superintendent.

“We’ve accomplished a  lot in the past 2 ½ years — we’ve moved up,” Sellers said. “We are making progress in that state report card. I hope that whatever direction we decide to go in that we’re going to continue with that progress. There are great pieces in place that should allow us to do that. We put alternative school back in at butler County after Dr. Strycker got here. We’ve accomplished a lot and there’s more to get accomplished. We’re going to have to accomplish that with just us now.”

The Board also heard an update from Curriculum Director Donna Ash who said the District needs to focus more on lower grades now than ever before.

“Time has to be spent at the bottom to get a good foundation,” she said.

Ash also spoke about the new RTI process, which is “proactive — not reactive,” and includes all student level K-12. The District will focus more on the bottom 10 percent and on things like dyslexia screening.

Those discussions promoted Board member Linda Hamilton to discuss the current curriculum staffing and additional personnel to assist Ash with all of the schools.

“I believe it needs to be advanced immediately,” she said.

The Board also held a lengthy executive session to deal with expulsions and suspensions and tabled approval of committees for the 2019-20 school year.

In the beginning of the meeting, Strycker honored the mechanics of the district for keeping the buses rolling and gave Chris Mosely a certificate. He also recognized Greenville Middle School Cheerleader Aniya Carter for her school spirit.

Roses gears up for Grand Opening