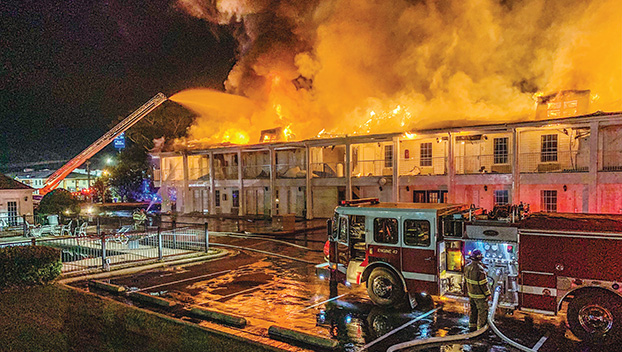 Investigators from the Greenville Police Department, Alabama Department of Insurance Criminal Investigations Division Arson/Code Bureau and the Bureau of Alcohol, Tobacco and Firearms were busy last Thursday sifting through the rubble of the Baymont Inn & Suites looking for clues as to what caused a late night fire.

The 41-unit motel located at 71 Jameson Ln. was the scene of a huge fire last Wednesday night as flames were spotted from the roofline of the business shortly before 9 p.m. Greenville Police Department officers arrived on the scene and notified the Greenville Fire Department. When GFD trucks arrived moments later, the flames were spreading quickly through the second floor. As firefighters attacked the flames from ground level and from the city’s aerial truck, they called for mutual aid. Firefighters from the Searcy and Liberty volunteer fire departments brought trucks and manpower to the fire.

“I was notified of the call while I was in Walmart,” Lovvorn said. “As soon as I came out the doors I could see the flames from the Walmart parking lot. I knew then that it was going to be a serious matter. I immediately got on over here and began to assist in evacuating people to safety and getting them to a safe distance.”

Lovvorn said the crowds were not from the motel itself, but were curiosity seekers who had seen the flames.

“We had a great many of our officers here and the Butler County Sheriff’s Department came and assisted us for a good period of time,” he said. “We managed very quickly to get the crowd back to a safe distance. There were many people that were way too close to the fire and actually in harm’s way. If something were to happen there. We got roads closed that needed to be closed for the fire department.”

Investigators spent the day last Friday trying to piece together what happened and Lovvorn said late that day that they were awaiting tests from the agencies that had been brought in to assist.

Late Friday, after 4 p.m. after investigators had cleared the scene, passing motorists saw smoke coming from the second floor and called 911. Police and fire units responded and the smoldering area was quickly doused.

“We have many resources in play that are coming to assist us from the agencies we requested,” Lovvorn said. “That’s part of making sure we check all the boxes and cover our bases. We will continue the investigation until we come to a reasonable conclusion on it.”

Also last Friday, the owners of the motel could be seen talking with investigators.

“They are allowed to be on scene with us,” Lovvorn said. “We will inform them as much as possible about what is happening. They also have to remain in a certain area and they can’t hinder our investigation until we’re done.”

The property was turned over to the owners earlier this week and Lovvorn said he hopes to have more on the cause and the investigation soon.

“I am very pleased with what we got so far,” Lovvorn concluded. “In fact, we got evidence we came across we normally wouldn’t have because of the job investigators did the moment they got on the scene. I will say we definitely have more information than we did Wednesday night and that the investigation is taking us on a different direction, but I am not willing to comment until we have all the facts in and finish all the interviews.”