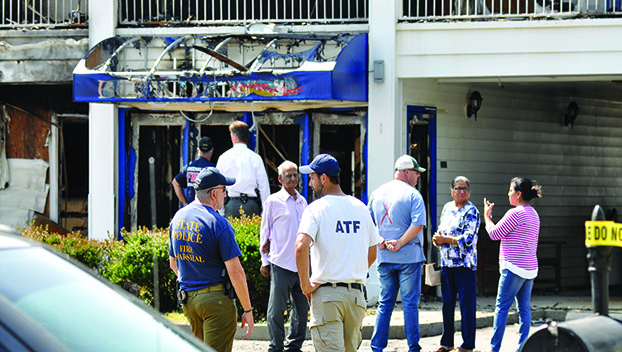 Investigators survey the scene of a sweltering fire that destroyed the Baymont Inn & Suites just off Interstate 65 in the heart of Greenville's business district Wednesday night. | Photo by Mark Rogers

Investigators from the Greenville Police Department, Alabama Department of Insurance Criminal Investigations Division and the Bureau of Alcohol, Tobacco, Firearms and Explosives were busy Thursday sifting through the rubble of the Baymont Inn & Suites looking for clues as to what caused a late night fire.

The 41-unit motel, located at 71 Jameson Ln., was the scene of a huge fire Wednesday night as flames were spotted from the roofline of the business shortly before 9 p.m. GPD officers arrived on the scene and notified the Greenville Fire Department. When GFD trucks arrived moments later, the flames were spreading quickly through the second floor. As firefighters attacked the flames from ground level and from the city’s aerial truck, they called for mutual aid. Firefighters from the Searcy and Liberty volunteer fire departments brought trucks and manpower to assist at the fire.

“I was notified of the call while I was in Walmart,” Lovvorn said from the scene Thursday afternoon. “As soon as I came out the doors, I could see the flames from the Walmart parking lot. I knew then that it was going to be a serious matter. I immediately got on over here and began to assist in evacuating people to safety and getting them to a safe distance.”

Lovvorn said the crowds were not from the motel itself, but were curiosity seekers that had seen the flames. 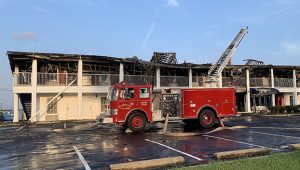 The damage to the Baymont Inn & Suites motel was exposed Thursday morning. | Photo by Mark Rogers

“We had a great many of our officers here and the Butler County Sheriff’s Office came and assisted us for a good period of time,” he said. “We managed very quickly to get the crowd back to a safe distance. There were many people that were way too close to the fire and actually in harm’s way. We also got roads closed that needed to be closed for the fire department.”

The motel had been closed for a day or two to address maintenance issues, according to Lovvorn. He added that there was only one occupant at the time of the fire.

Lovvorn said police would have the site under 24-hour guard until the investigation is complete. Crews will be back on the scene early Friday to continue working.

More on this story will be reported as it’s made available.