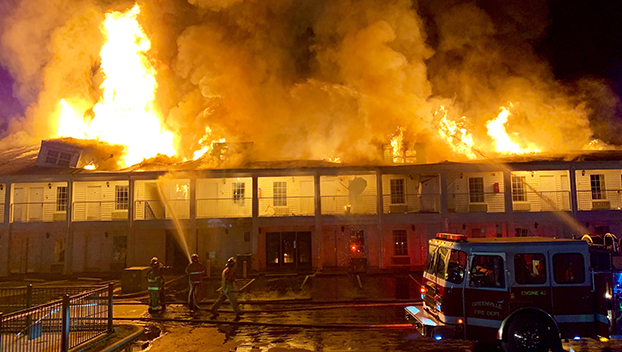 Greenville Fire Department personnel is currently on the scene of fully involved structure fire at the Baymont Inn & Suites just off Interstate 65 behind Bates House of Turkey and near Holiday Inn Express in Greenville.

Greenville Police Department officers are also on the scene blocking the roadways as firefighters work to extinguish the large blaze.

Fire calls to the motel, which was once a Jameson Inn, were received just before 9 p.m.

UPDATE: 9:47 p.m. – Paul Stabler Drive in front of the Holiday Inn Express and Walmart as well as Jameson Lane and Cahaba Road bordering the Baymont Inn & Suites, which remains on fire, are currently closed as firefighters battle the blaze. Motorists are asked to avoid these areas due to working personnel and stretched fire hoses.

For immediate updates, including traffic detours, visit us on Facebook.

More information on the fire will be reported as it is made available.