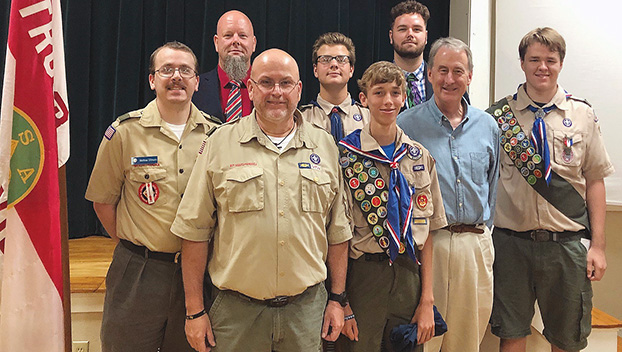 Ty Kendrick has managed to achieve the highest level obtainable in the Boy Scouts organization at only 14. With that achievement has come a facelift for the exterior of his school’s gym.

He began his climb to the top of Scouting at the age of six as a Tiger Cub Scout, going on to earn Cub Scouting’s highest award, the Arrow of Light, before moving on to the Boy Scouts in 2017.

“What I have enjoyed the most in Scouts is learning many leadership aspects that Scouting teaches you — to serve others while bettering yourself,” Ty explained. “Being able to grow in my faith in Christ while serving my community has taught me many lessons to prepare me for the future.”

Ty has spent the last two years working his way up the ranks in Boy Scouts with the ultimate goal of earning the rank of Eagle Scout, an achievement many Scouts do not obtain until later in their teens.

One of the requirements for Eagle Scout is the completion of a project that involves the Scout’s school, church or community.

Ty chose “the home of the Eagles,” Fort Dale Academy.

“I wanted to do something for my school,” he said. “My dad and I noticed that the gym was in dire need of cleaning and repainting. There was a lot of mold and mildew growing on the side of the gym. There were also several spots the paint was chipping and coming off the walls of the gym. I thought doing this – making our gym more presentable to not just our school but the community – would be a great opportunity.”

The project plan must be approved by the organization benefiting from the effort, the Scout Leader, the unit committee and a district representative, before work on the project can even begin.

Once past those hurdles, funds also have to be raised to cover the cost of supplies and equipment needed to complete the project. Ty raised the funds for the gym project in two ways: through helping his troop, 520, sell Camp Cards to receive a portion of those monies for his project, and secondly, through letters sent to individuals and organizations seeking monetary donations or donated supplies.

It took the teenager close to three months to raise the $1,400-plus needed for the project.

After that, a lot of elbow grease was required on Ty’s part, along with assistance from family, friends and fellow Scouts.

“My dad, Greg Kendrick, and a close friend of the family, Chris

Brady, helped me with many of the physical aspects of the project,” Ty said. “They also aided me in making sure the volunteers knew exactly how to complete the tasks I assigned. I had several of my fellow Scouts help with the project.”

Overall, the project took approximately three days to complete with all of the pressure washing, painting and trimming that had to be accomplished.

The gym project was a challenge in more ways than one for the Scout.

“Learning how to lead and organize is a lot more difficult than I expected,” he admitted. “When I was planning my Eagle Project, one of my biggest concerns was getting the volunteers organized and keeping them engaged in order to complete my project.”

Ty Kendrick is feeling good about what he has accomplished.

“It is a great honor knowing that I finally achieved my goal,” he said. “At times, it seemed that it would take forever, but with encouragement from my family and fellow Scouts, it really came a lot quicker. That’s mostly because of the people I was surrounded with and the many activities our Troop has been involved with throughout the community.”

If he were going to share advice and encouragement to younger boys aspiring to Eagle Scout status, this is what Ty says he would tell them:

“Becoming an Eagle Scout is not something you do by yourself. It takes a lot of time and dedication by our Adult Leaders and my fellow Scouts. All of the skills you learn help boys learn not just basic skills in the outdoors, but how to lead others,” Ty explained. “By having our Adult Leaders around, we learned how to make decisions. And if our decisions aren’t exactly the best, they are there to help us learn from our mistakes and make better decisions. With all of this, working towards Scouting’s highest honor, while also learning many, many valuable skills, prepares us to meet many challenges that makes us better citizens.”

Since the Boy Scouts of America organization was founded in 1912, only four percent of Scouts have actually gone on to achieve Eagle Scout status.

“That is a number that should increase,” Ty concluded. “That’s why I would like to see more working towards this goal. No, it’s not easy to become an Eagle Scout, but it is very much personally rewarding.”