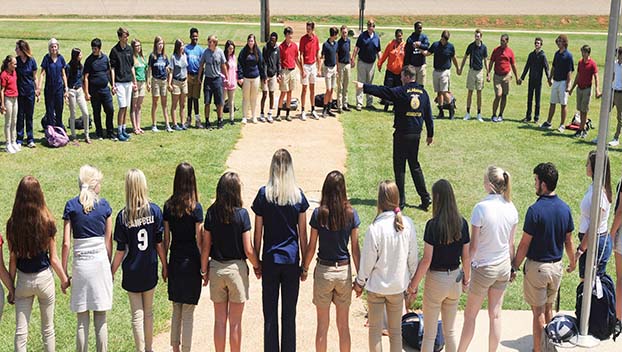 State leaders from the FFA were impressed last Thursday as they visited members of McKenzie School’s chapter.

State President Will Aycock and State Sentinel Garrett Springs spent the day with the more than 100 members of the school’s FFA and Advisor/AG teacher Ryan McNaughton. Aycock and Springs led the students in a variety of team building exercises and spoke to individual classes.

“It means a lot to our program to have them visit,” McNaughton said.

FFA has more than 600,000 members nationwide, according to Aycock.

“The great thing about McKenzie FFA is the amount of student participation,” Aycock said. “When Garrett and I were traveling down here we were talking about it. It ‘s a small community and it’s a small school, but the strength of the FFA chapter is outstanding.”

“I’ve never been to visit a student chapter with this many participants for this size of school,” he said. “It’s a great program here at McKenzie.”

Members at McKenzie School range from seventh-graders to seniors and meet regularly under the leadership of McNaughton and student President Blake Brown.

“I’m a student at Albertville High School and we’re almost a 7A and what’s amazing is that we’re at a 1A school and they have a chapter that is just as strong,” Aycock said. “The impact that they make in their community is going to last and they are improving their lives.”

Aycock and other state officers have been busy traversing the state visiting FFA chapters.

Springs said the support for the FFA program at McKenzie impressed him.

“I’ve been to a lot of FFA chapters through my District office and now my State office,” he said. “This is one of the best chapters I’ve ever been to. This is the first chapter meeting that I’ve been to where there were that many students and that much involvement. They were super-awesome. It was great to watch and be a part of. I’m fortunate that I get to travel around the state with Will and the other officers and teammates and get to impact others in a positive way, whether it is through FFA or just in life. We are excited and passionate about what we get to do.”

McKenzie FFA members also conducted a little business at their meeting while the two state officers were there and approved the membership selling fruit as fundraiser that is slated to begin on Sept. 23.