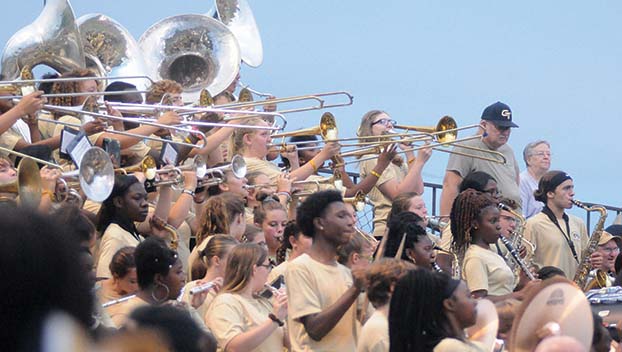 Greenville High School’s Tiger Pride Marching Band will help its neighbors to the south by performing for McKenzie School’s Homecoming game and festivities on Sept. 27. | Photo by Mark Rogers

Greenville band to march for McKenzie

It will be a special night in McKenzie on Sept. 27.

Not only is it Homecoming, but there will also be some special guests in attendance — the Greenville High School Tiger Pride Marching Band.

McKenzie does not have a band program and GHS Band Director Brett Johnson said the Tigers are happy to oblige.

“We’re super excited,” Johnson said. “We just made it public a couple of days ago, but we kind of knew we wanted to do this. We’ve been trying to figure out a way to pull it off and the last couple of years we hadn’t been able to do it — either Greenville didn’t have a bye week or McKenzie didn’t have a home game. This year, it lined up perfectly.”

“We played for the elementary school kids in the fall,” Johnson said. “We did a little Christmas concert. I kind of floated the idea to him then. I said, ‘It kind of lines up perfectly that we have a bye week on your Homecoming.’ I told him we could be the McKenzie band. He said, ‘Yeah, that would be great.”

Over the summer, Johnson and Brown worked out the logistics.

“They welcomed us with open arms,” Johnson said. “They’re excited too. It was collaboration with Mr. Brown and the folks at McKenzie.”

The Greenville High School Band is looking forward to the chance to perform at their fellow Butler County School, according to Johnson.

“They’re very excited,” he said. “It’s kind of a good situation for us because Greenville is off and that next day, Saturday, is our first band contest of the year. It helps them and it kind of helps us out as well.”

However, the Greenville Tigers Marching Band won’t just be performing at halftime.

“We will be the McKenzie Band that night,” Johnson concluded. “Since it’s their Homecoming that night, we’re going to give them a band experience. We’re going to do a pregame show, the National Anthem; we’re going to make a tunnel for their football team to run out to and we’re going to play in the stands and play halftime. It should be an exciting night.”

The Regional Medical Center of Central Alabama has earned The Joint Commission’s Gold Seal of Approval for safety, quality and... read more