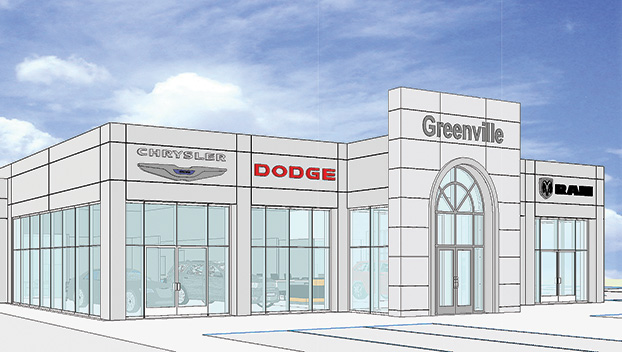 The proposed Chrysler, Dodge, Jeep, Ram dealership will be located on Interstate Drive next to the Hampton Inn and will cost approximately $2.7 million to build. | Artist Rendering

The City of Greenville put the pedal to the metal Monday night entering into a project agreement that paves the way for the construction of a multi-million dollar automobile dealership.

“This is something that we’ve been working on and talking about for some time,” Mayor Dexter McLendon said prior to the announcement.

Approved was a Definitive Project Agreement between the city, HAHA Investments, LLC., HH&A Investments, LLC. and Calvin and Cleve Poole. The investors plan to build a new Chrysler, Dodge, Jeep, Ram store just off Interstate 65 next to the Hampton Inn, two businesses down from the recently renovated Greenville Chevrolet dealership, operated by HH&A Investments.

Area businessmen Chappell Hill, Charles Haigler, Chris Avant and Jake Aeschliman — Greenville Chevrolet GM — are partners in the $2.7 million dealership and were present at the meeting. Hill addressed the council on behalf of the group.

“First, we just want to thank the city council and the mayor for all of the hard work you have put in,” he said. “We have been working on this for a year and a half and without your support, we would have never gotten to this point with Chevrolet or the project at hand. We’re excited about Greenville and appreciate the relationship that we have with the city.”

The state-of-the-art facility will be approximately 12,000 square feet in size and encompass two parcels of property within the city limits totaling 8.90 acres. The project is similar to the Chrysler, Dodge, Jeep, Ram dealership recently built in Troy.

“It is going to face I-65; it’s going to be the first thing that you see coming into Greenville and we’re hoping that it’s a shining star as you come in,” Hill said.

The dealership will include a lobby, reception area, showroom, sales offices, administration offices, repair area and parts department. Calvin and Cleve Poole donated the land for a roadway, which will be constructed, along with other infrastructure and retention area for water runoff.

“We will be the only Chrysler, Dodge, Jeep, Ram store between Greenville and the State of Mississippi,” Hill said. “Chrysler thinks that is a very important factor and we’re super excited about it because there’s a big opportunity we think in that area.”

Initially, the dealership will create 20 jobs, however, the partners hope it will quickly grow to 25 employees, equal to Greenville Chevrolet’s current workforce.

The council also heard from Jeff Rouzie with Retail Strategies Business Development team. The investment firm was recently hired by the city to crunch numbers and provide them with data related to projects such as the proposed dealership.

“This is what an economic developer likes to see,” Rouzie said. “When you have a large dealership like this that’s combining with another dealership, it really creates a critical mass. What that is going to do, is a lot of the sales are going to be from people driving far away, coming into Greenville spending their dollars, not only at the dealerships, but at all of the other businesses that are out there as well. So when we’re looking at this, we can just look at the direct economic impact and you can see a big boost for the City of Greenville and their tax collections. Not only that, but for the county and property taxes in other areas, business licenses, additional tax revenues from materials
purchased from local businesses during construction.”

In addition, Rouzie said that having two large dealerships next to one another helps draw in other retailers. He added that his firm is “working on several others” at this time.

“We did $12 million of that in taxable sales — we think that the combined entities are going to be more like $20-plus million the first year,” Hill concluded. “So, we are very excited. We are grateful for this opportunity, appreciate everybody’s support of it and look
forward to the partnership.”