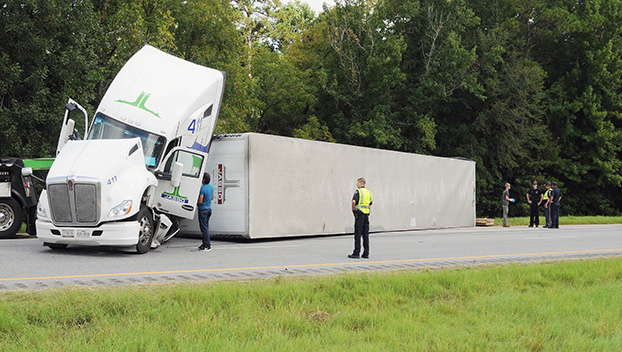 An accident with a chemical spill early Friday morning shut all lanes of Interstate 65 for several hours and as of 11 a.m. southbound lanes remained blocked.

Greenville police and fire officials were dispatched to the area of the 129-mile marker southbound around 2 a.m., and arrived on the scene to find a jackknifed tractor-trailer. No injuries were reported, but shortly after arrival, Butler County Emergency Management Agency officials were called to the scene to investigate a potential chemical spill. Upon inspection, a determination was made to shut the interstate.

Shortly after 6 a.m., it was also announced that Greenville High School would be closed due to its proximity to the accident. Butler County EMA Director Kris Ware said a 1,000–foot perimeter was set up around the scene. Northbound traffic was later allowed to flow on I-65 around 8:15 a.m.

Hazmat crews from Montgomery Fire/Rescue responded to the scene to assist and said the truck was carrying Cyclohexanol. Units from Montgomery arrived on the scene and determined there was no significant leak of the product. Shortly after 9 a.m. Montgomery Fire/Rescue units turned the scene over to independent cleanup contractors. The Greenville Fire Department, Butler County EMA, Greenville Police Department and State Troopers from the Alabama Law Enforcement Agency remained on the scene as crews worked to offload the truck.

Cyclohexanol is a colorless thick liquid or sticky solid with a faint mothball odor. It is used in the manufacture of nylon, lacquers, paints and varnishes and as a solvent in cleaning and degreasing operations. The chemical can affect humans when breathed in and by passing through the skin. Contact can irritate and burn the skin and eyes. Breathing Cyclohexanol can irritate the nose and throat. High exposure to the chemical can cause headache, nausea, vomiting, dizziness and passing out.

For more on the story, see next week’s edition of The Greenville Advocate.