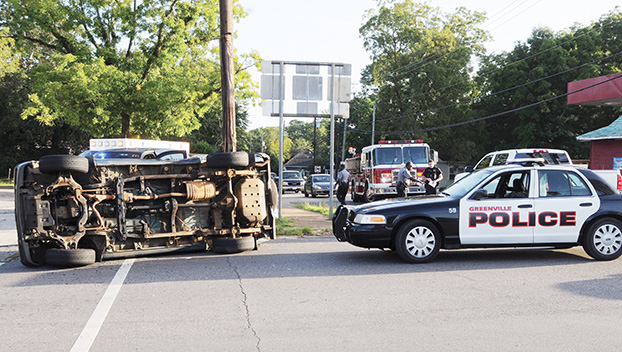 Shortly after 7:15 a.m., Greenville Police Department officers responded to a report of a multi-vehicle accident involving a rollover at the corner of Commerce and College streets. The Greenville Fire Department was called and first responders also checked occupants for injuries, though no major injuries were reported.

GPD officers directed traffic around the scene as firefighters worked to stop a fuel leak from the overturned vehicle. Butler County Sheriff’s Office deputies also assisted at the scene and city crews brought a load of dirt to absorb the leaking gasoline and prevent it from flowing downhill or into the sewers.

The accident snarled traffic at a time when school buses travel through the area. Officials had cleared the scene by 8:30 a.m.