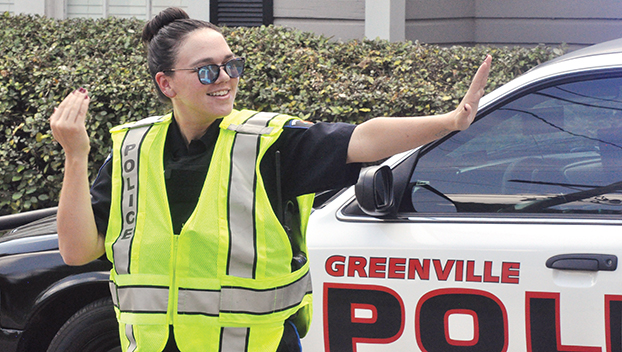 Marissa Morrison is back patrolling the streets of Greenville.

The Greenville Police Department officer was bitten by a rattlesnake during the early morning hours of June 17, and says she’s thankful to be alive, much less back on patrol.

The two-year veteran and third generation police officer said that without the help of fellow officers, physicians, nurses and staff at the Regional Medical Center of Central Alabama in the Camellia City and a local physical therapist, she wouldn’t be back out in uniform.

“I’m glad to be back,” she said last Friday as she prepared to direct school traffic on Fort Dale Road. “I feel good. I still have a tingle every once in a while.”

Morrison was completing an overnight shift and was at the airport when the snake struck.

“I was working the 6 p.m. to 6 a.m. shift,” she explained. “It was about 5:15 a.m. — toward the end of my shift — and I parked out near the airport to finish paperwork. I often go out to the spot for the peace and quiet before we have a meeting at the end of our shift.”

Morrison had finished paperwork and was at the rear of her cruiser and decided to take a picture of the sunrise when the snake struck her.

“I was about to get in my vehicle when I felt him hit my left leg,” Morrison said. “I heard him rattle after he bit me. I screamed. I immediately got on the radio and called out. My unit number is 209, and I said ‘209 to 911 and 203 (Cpl. Jimmy Oliver), I’ve been bitten by a rattlesnake.’ I know they heard the panic in my voice.”

Shortly after making the distress call, Oliver and officer Tom Powell arrived on the scene. Morrison said Oliver knew right where to find her because she often goes to that spot. Oliver arrived before an ambulance could and loaded her up in his cruiser and rushed her to the emergency room at the RMC of Central Alabama.

“If it wouldn’t have been for my guys, I don’t know where I’d be,” she said referring to her fellow officers. “I owe them my life. My corporal (Oliver) had to carry me into the hospital. I was in so much pain and my leg was swelling.”

While at RMC, doctors administered six vials of antivenin.

“I’m super thankful they had the antivenin,” Morrison said. “The doctors did a great job to make sure I was stable. The nurses calmed me down. One nurse, Janice Edison, even reached out to me afterward and told me to keep a positive spirit. I’m really glad they had the antivenin here. There’s no telling what would have happened. I had already started having dry heaves and my lips and tongue were numb. It felt like the nerve endings in my leg were open.”

Morrison was transferred to Jackson Hospital in Montgomery and received an additional 10 vials of antivenin for a total of 16. She spent several days in ICU. The road to recovery has been a long one.

“Physical therapist Shannon Hartley really helped me,” Morrison said. “I learned how to straighten my leg and walk. Her and her team did an awesome job.”

“The officers’ quick actions in getting to her and taking her to the hospital saved valuable time,” he said. “By the time they get her to the ER, she was unable to walk. I want to commend my officers’ actions, along with those of the Regional Medical Center. Without us having a hospital here that could provide her with the initial treatment and care, I truly believe this could have been much worse.”

As for Morrison, she wants her story to be known, so that people are cautious.

“You need to be aware of your surroundings,” she concluded. “We have a lot of snakes in our area and you need to keep an eye out whether you’re working or having fun. Snakes can be anywhere. I don’t want someone to go through what I have.”