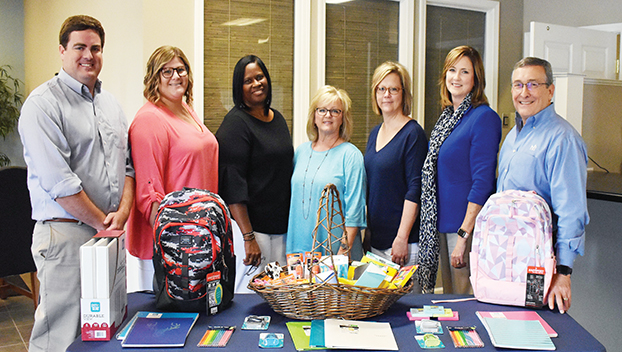 Camellia Communications is not putting the lack of school supplies for local foster children on hold.

The advanced telecommunications provider is in its second week of a monthlong school supplies drive benefitting the Butler County Department of Human Resources (DHR). Evelyn Causey, president and chief operating officer for Camellia Communications, said she couldn’t standby when she learned of DHR’s need.

“After talking with some of the employees at DHR, we realized that their foster parents and the children that they are responsible for were struggling to make ends meet — August is a tough month for everybody — just the cost of getting the kids back in school,” she explained. “We thought that this would be an easy way to help and take a little bit of that burden off them.”

Camellia Communications customers received invitation-size postcards in the mail in late July requesting assistance with the drive. Causey said the early response from customers has been encouraging.

“We’ve really been amazed with the response,” she said. “We’ve received a good bit of supplies already and hope to get some more in by the end of the month.”

Causey added that no donation is too small.

“Anything you’re able to give,” she said. “We’ve received everything from loose-leaf paper to pens all the way to backpacks, so we’re really open on anything that someone might possibly good give. We will definitely put it to good use.”

If the supplies drive goes as well as Causey and her team would like, she hopes DHR will be able to store some supplies for future foster children.

“It will help them this year instantly,” she said. “They get a lot of their requests come in after kids get started to school and they realize what they need school supplies wise. Also, it helps with children that are being taken into the system during the year because a lot of times they don’t come with a lot of things, so this would be a way that they will have everything that they need when they get to a new foster home.”

As for Camellia Communications’ involvement with DHR, the two organizations work together often.

“Typically, we support DHR as much as we can — the foster children,” Causey concluded. “We also participate in their toy drive for Christmas, making sure they have what they need for Christmastime and this just presented another way to help out during the year.”