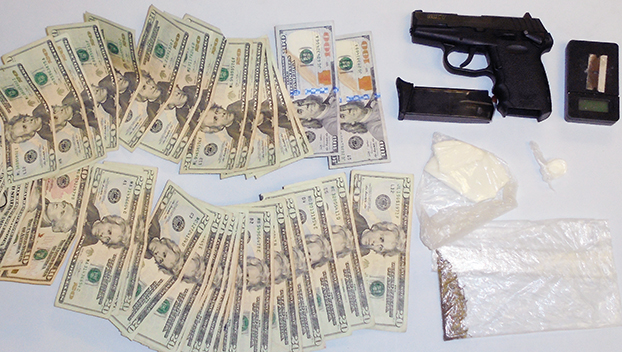 A Georgiana man is behind bars after members of the Greenville Area Drug Task Force and Greenville Police Department executed a search warrant at a residence on South Street in Greenville Tuesday.

Antonio Mobley, 30, was located inside the residence in possession of crack cocaine, synthetic marijuana, a stolen firearm and a scale for weighing drugs, according to Greenville Police Chief Justin Lovvorn.

“The search warrant was a result of an extensive investigation and surveillance efforts over a period of time,” Lovvorn said.

“Mr. Mobley also had a few hundred dollars that is believed to have been used in the sale or acquisition of illegal narcotics,” Lovvorn said. “This money was seized by the DTF.”

Lovvorn said the Drug Task Force had reason to believe that a wanted subject was frequenting a residence on South Street and participating in multiple illegal activities. The Drug Task Force then obtained a search warrant and executed it and found Mobley in the residence along assorted drugs and a stolen firearm.

“The stolen firearm that was recovered had been reported stolen from a business in Evergreen,” Lovvorn said.

Lovvorn praised the work of the Drug Task Force and encourage citizens to inform police about criminal activity in their neighborhoods.

“I would like to commend the hard work and dedication of the Drug Task Force,” he concluded. “It is because of their efforts that a dangerous, wanted felon is now off the streets. We will continue our efforts to keep our citizens safe and take these type of harmful items off the streets. If anyone has knowledge of illegal activity, we encourage you to report it. We will continue to work together with our citizens for a safer community.”