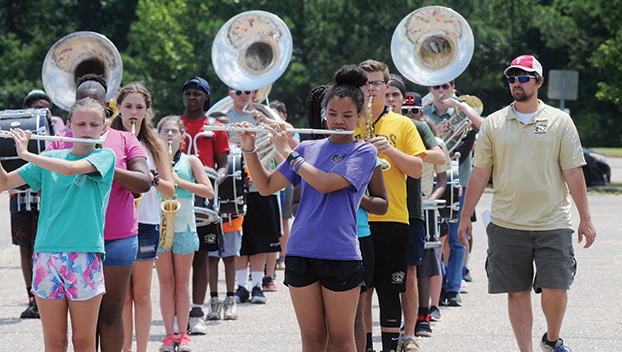 It was hot in the parking lot at Greenville High School as the school’s band members began learning drills and music for the upcoming season.

For the past several weeks, Director Brett Johnson, the GHS band staff, band members and auxiliaries have been working hard to prepare for the upcoming season. Last Friday, the band performed a sample of the music from this year’s show for a large crowd of parents, grandparents, families and fans.

“Our show this year is a pretty intense show,” Johnson said. “We have a lot of different tunes put into one show. We’ve been working hard for the past few weeks.”

“The first part is a rock feature,” he said. “It has ‘Enter Sandman,’ ‘Back in Black,’ ‘We will Rock You,’ it’s all those tunes squeezed into one opener. It opens up with electric guitar – we’re going to have a rock band on the field. It’s going to be a really cool thing. We’ll have props and a stage set up on the sideline for the rock band. It’s going to be pretty cool.”

The show doesn’t have an official title yet, but Johnson said students are calling it “Music that shaped the genre.”

“It’s going to feature a rock genre first, then a hip hop genre for the second song and a pop genre for the third song,” he said. “We’ll have 10 songs squeezed into three musical selections. The second song will start with some old school hip hop like “Gangster’s
Paradise.” We’re doing Vanilla Ice’s ‘Ice, Ice Baby,’ and we’ll have somebody doing the vocal part. The band will do a dance of that era.”

Band members also convinced Johnson that the current hit, “Old Town Road,” needed to be a part of the show.

“They came to me at the end of the school year last year with the idea and I kind of said, ‘No way,’” he said. “I just got it stuck in my head and so we put it in the show. We’re going to close the hip hop portion with it. It’s kind of a country rap fusion song. The auxiliary is going to have cowboy hats for that.”

The closer will feature a variety of oldies, including some Beach Boys,
according to Johnson.

“It starts with ‘I Get Around,’ which is appropriate because we’re all over the musical spectrum,” he said. “The auxiliaries will be doing beach ball routines. Then we’ll move into ‘Billy Jean,’ by Michael Jackson. The third song and closer will be Prince’s ‘Purple Rain.’ It’s a pretty intense show with a lot of moving parts.”

This year’s band numbers more than 100 with auxiliaries and instrumentalists.

“It took us a while to get here, but we’ve got a good number,” Johnson said.  “We have 102 members. We’ve got a busy fall with football games and several contests. This year, we’re doing four. We have two in one day. We go to Rehobeth and Daleville on the same day. We have one in the morning and one in the afternoon. The next weekend we go to Andalusia. The first contest is the last Saturday in September. The last one will be in Prattville. It will be a busy season.”

The Symphonic Band will also have a busy fall, something different, according to Johnson.

“We’re going to have a concert within the first three weeks of school,” he concluded. “We’ll practice symphonic band during the day and marching band after school. It will be good music. Music from ‘The Planets’ and ‘Carmen.’”