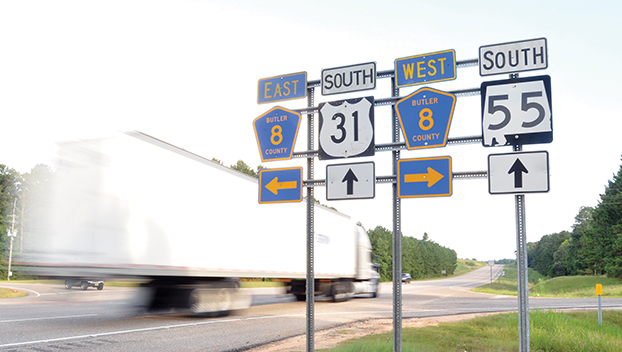 Butler County Commissioner Darrell Sanders said that meetings last week with representatives from the Alabama Department of Transportation might lead to a better understanding of the needs of the county when it comes to infrastructure.

“ALDOT held their annual District Meeting at the Greenville office and asked us what our concerns were,” Sanders said. “I spoke to them about the Exit 114 ramp off Interstate 65 and the lack of turn lanes at several spots on AL-55.”

Sanders said two spots are major concerns for traffic on the AL-55 corridor between Georgiana and McKenzie — one near Georgiana by the Fred’s store and the other in the area of Butler County Road 8 and AL-55 outside McKenzie.

“They told me that plans were to have turn lanes installed when they repaved the road,” he said. “This might be in 2021 or maybe 2022. It was originally supposed to be done in 2020.”

Sanders said ALDOT invited city and county officials to drop by at different times to discuss their concerns at the District Meeting.

“They invite local officials to visit and everyone has an allotted time,” he said. “I went because those areas of concern are in my district.”

Since changes to Exit 114 off I-65 near Georgiana, residents and local officials have been concerned. In February, ALDOT changed the exit pattern by removing stop signs at the end of the exit ramp and instead having traffic on AL-106 stop at the intersection.

“They say it’s working the way they hoped it would in getting people off of the interstate,” Sanders said. “They said people need to obey the traffic signs. One of the problems is that people coming off the interstate are stilling stopping. It’s been a hard adjustment for local drivers. They said they didn’t know of any other ramp that was similar.”

Though ALDOT may not change the flow of traffic at Exit 114 again, Sanders is hopeful officials will take the other concerns into consideration.

“The section of 55 near County Road 8 is the worst one,” Sanders said. “There have been several accidents there. You are going uphill and into a curve and traffic stops to turn toward McKenzie.  It’s dangerous. It’s the turn people take to go to the school. If they installed a turn lane it would be a lot safer. People have to stop in the passing lane to turn and traffic moves very fast in that area. I requested that they put a turn lane in at County Road 8.”

Sanders said he was hopeful that ALDOT officials would listen to the suggestions.

“They did seem interested,” he concluded. “They were writing things down — making notes.”

The County Commission meets for its August meeting on the 13th.