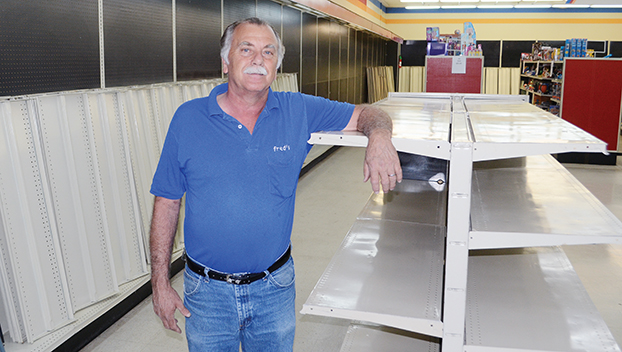 Longtime Greenville businessman Randy Beeson stands in the nearly empty aisles of his Fred’s store, which will close its doors for good on July 31. The 60-year-old retailer is hoping to continue his rich tradition with a new company in the near future. | Photo by Adam Prestridge

An emotional Randy Beeson addressed the Greenville City Council Monday evening as the self-made entrepreneur explained the next step in his lengthy career in retail sales.

The council had just heard from City Attorney Richard Hartley, who announced a letter of intent, including financial tax incentives to Variety Wholesalers, Inc., the parent company for Roses Express, to locate in the soon-to-be shuttered Fred’s building.

“They are going to take over the Fred’s store — they are going to lease it — and open fairly soon,” Hartley said. “To do that, we have decided to give them, of the 4 ½ cents that we collect, we are going to rebate them 2 cents for the first two years and then 1 cent the third year.”

Prior to the council’s vote, the 60-year-old business owner expressed his gratitude not only to Mayor Dexter McLendon, councilmembers and city employees, but to the loyal citizens of Greenville.

“They are opening about 35 stores this year in the United States,” Beeson explained. “They are covering about 14 states that they have Roses in and I think they are only looking at about five locations in Alabama. They flew down, toured the store and they liked it.”

According to the company’s website, Variety Wholesalers, Inc., is a family-owned business that began in 1922. In 1949, John W. Pope took over his family’s five-and-dime stores, eventually growing them into one of the largest privately-owned companies in the United States. Today, Variety Wholesalers is based in Henderson, N.C., and Pope’s son, Art, serves as chairman.

“This is an opportunity for us to get them here,” Beeson said. “They needed a little incentive; they are going to invest about $80,000 in a remodel. I’ve got a lot of things I’m having to do and its costing me about $55,000 to get my building ready for them to take acquisition. What they’ve asked and what I asked of Mayor McLendon is to try to give them this incentive, so that would lock the deal; that’s where we are. I have a tentative lease agreement, this is the only thing we’re lacking on locking the deal.”

The council voted unanimously to offer the discount retail company the tax incentives proposed by Hartley. Councilman Tommy Ryan made the motion and Councilman Bryan Reynolds seconded it. Councilman Jimmy Lawson was absent.

“It feels good,” Beeson said following the meeting. “It was a big hit to us because it isn’t like I was just the manager. I was the one that brought it to town, I’m the one that’s been here 32 years, I’m the one that’s managed it the whole time — I later became the owner 13 years ago — I even hauled my own freight to the store and from that point I was so heavily into it, more than any normal manager would be. This is a Godsend.”

At the end of the day next Wednesday, July 31, Fred’s of Greenville will lock its doors one final time.

“I will be the 312th store to close since January when I close next week,” Beeson said.

Fred’s officials announced earlier this month that it will shutter another 129 stores this year, as the company works to repay its debt and diversify its product selection. Closure of 263 additional stores had already been announced this year, including the stores in Greenville and Georgiana.

“While it is never easy to make decisions that impact our valued employees and customers, this initiative represents another necessary step in our continued efforts to stabilize our business by simplifying our store portfolio and product assortment,” Fred’s CEO Joseph Anto said in a statement.

The discount retailer will have roughly 80 retail stores and 166 pharmacies still operating following all the closures.

Beeson, one of only 10 franchisees left in the company at the time, received his call at 10 a.m. on May 9, which is also his wife, Cindy’s, birthday. He explained that on the other end of the line was a representative with the Fred’s corporate takeover group — an investment firm — that purchased more than $200 million worth of stock, becoming Fred’s largest shareholder. When the group’s stock didn’t perform as they anticipated, they took it to management and board members and started liquidating the company.

“A lot of customers have asked me a hundred questions about it, but that’s the simple of it,” Beeson said.

Despite the unsettling news, the gritty businessman rolled up his sleeves and quickly got to work.

“In trying to move forward — I’m a person that gets up, shakes it off and starts something else, I made the contacts and got the ball rolling,” Beeson said. “First of all, I own the property, so without getting someone in it, it could get serious really quick for me personally.”

When McLendon learned of the news, he knew it was a tough blow to Beeson and his family.

“This is a big deal for you, 44 years of working for Fred’s; you got the rug pulled out from under you,” McLendon said Monday.

After six weeks of hard work and determination, it appears there is a light at the end of the tunnel as Beeson prepares to open another chapter in his career and Roses Express prepares to reopen his doors.

“I may be the oldest standing manager of any single store in the city,” Beeson concluded. “I’ve still got a lot of life left in me and I want to stay. I’ve been offered a position with them to run it.”