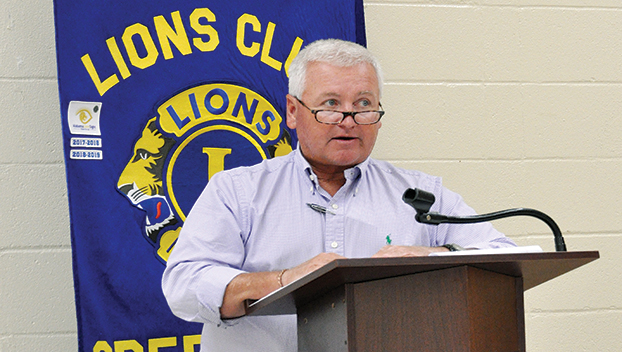 Butler County, along with all Alabama counties, will be receiving more road funds soon as the new gas tax is slated to begin being phased in starting in September.

Peavy said though the additional $700,000 sounds like a lot of money, in reality it isn’t.

“Is that going to solve our problems?” he asked. “No, it isn’t – absolutely not. The state gets 65 percent of the gas tax, we get 25 percent and the cities will be get the other 10 percent of it. It will allow us to do more than we were doing. Our road system didn’t get this way overnight and it’s not going to crawl out of this overnight.”

Peavy explained some facts about paving to the group.

“The life expectancy of a paved road is 15 years and a bridge is 50,” he said. “We have some roads that were paved in the 60s that have never been resurfaced at all. Virtually every road we had in the county had striping on it. We’ve got some roads now that you can’t see the stripes on. The revenue for that changed in 1995. The big counties got it and the little counties – we got what we got.”

Part of County Road 7 was recently resurfaced, according to Peavy.

“County Road 7 is a really long road and this was only a portion of it,” he said. “It runs from the Garland Community up to Lowndes County. It’s one of the longest roads we have in the county.”

Peavy said many major collector roads are eligible for federal and state programs, but many minor collector or smaller roads haven’t been resurfaced in years because the funding sources are different.

The tax, after fully implemented, can go up or down one cent each year, according to Peavy.

“It’s built in for inflation,” he said. “I doubt it will go down. These monies can only be used on materials – not equipment, salaries or buildings. It’s only for road or bridge materials.”

Peavy added that some bridges in the county are more than 50 years old.

“Those bridges are vastly out of date,” he said.

Funds available for major collector roads, ones that connect state routes, have helped pave more than 87 miles of county roads in the past six years.

“That’s more paving than has been done in Butler County in many, many years,” he concluded. “We are crawling out of this deal. It’s not going to be an overnight fix. No one is more embarrassed by the roads than the commissioners. It’s what we’ve been dealt and we have to deal with it.”