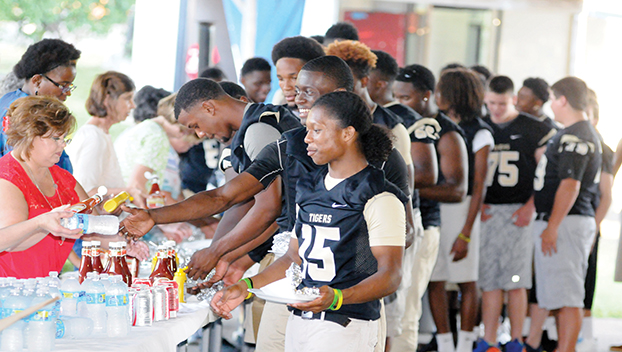 Football players line up to eat during a previous Back-to-School Bash held in Georgiana. | File Photo

The annual Back-to-School Bash is slated for 6 p.m. on Friday, Aug. 2, at Hank Williams Park in Georgiana and organizers are excited.

“We invite all the kids in the county,” the Rev. Allen Stephenson of the Butler County Ministerial Association, said. “We have football teams, cheerleaders and lots of kids. We feed them hot dogs and snacks.”

Stephenson said the event includes music and a speaker with a message.

According to Stephenson, the event has taken place for nearly 20 years.

“It’s a joint effort between many churches in the county,” Stephenson said. “We’ll serve about 800 hot dogs. Everything we provide is donated.”

Stephenson said another event is also planned to ring in the school year.

“We’re doing prayer walks in all of the schools on Aug. 11,” he said. “We’ll do the walks at 3 p.m. on a Sunday afternoon. We walk through the schools and pray for the kids, the teachers, the administrators, parents, athletic programs and more. We stop several times in each school and pray for all facets of education. It’s an annual event put on by the Butler County Ministerial Association.”

Stephenson said parents and teachers alike are invited to the schools to pray.

“We’ll have leaders from the Ministerial Association at each of the schools,” he said. “It’s been pretty well attended in the past, but we’d love to have more people come out.  It’s being held a little later this year because we wanted to wait a week until after school had started.”

Stephenson added that he and others from the Ministerial Association look forward to the annual event.

“We will bathe the schools in prayer,” he concluded.