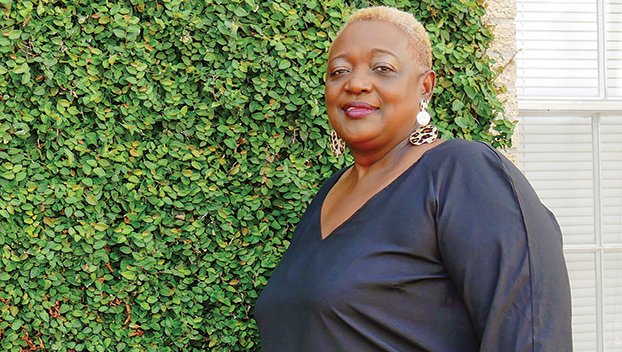 Velma Briggs recently retired from the Greenville Water Works & Sewer Board after four decades of service to the Camellia City. She plans to visit family during retirement, including spending time with her four grandchildren. | Photo by Angie Long

If you had once told the teenage Velma Briggs she would ultimately spend four decades of her life serving the Camellia City, she admits she would have been surprised.

“But here I am, 40 years later,” she said with a hearty laugh and a shrug. “In some ways, it has gone by pretty fast. Maybe because I started so young. It’s been positively rolling along — sometimes uphill, but rolling.”

Briggs, who just retired from the Greenville Water Works & Sewer Board, was a business education student at Greenville High School when her teacher, Frances Benson, recommended her for a position opening at City Hall.

“She wanted me to go over there for an interview and I didn’t want to go,” Briggs recalled. “I didn’t think I was ready. I told her, ‘I’m not dressed for an interview!’ And she said, ‘I’ve told them about you and it’s going to be fine.’ I got the job; started right out of high school in 1979.”

In those days, the water department was housed in the same area as the city clerk’s office inside City Hall. While Briggs stuck with her work as a typist and clerk for the Water Works, she and the rest of the staff made several moves before the end of her career with the City.

“That little building was cute, but it needed replacing,” she said. “We have a nice drive-thru now. The customers really do love that. The old building had a drive-thru, but it had a sort of ramp you had to use and this one is nice, flat and level.”

Keeping customers happy has sometimes been a challenge, according to Briggs, adding that it’s all part of dealing with the public.

Even though you don’t become friends with every customer that comes through the door, you do become accustomed to their habits, Briggs adds.

“We had one older gentleman we could always count on to show up to pay his bill on the first day, right between 9 and 9:15 a.m. after he’d visited the bank, and then one month he just didn’t show up. We thought for sure we’d done something wrong.” Briggs sighs and shakes her head. “Turns out, he had passed away, but we were right — something had gone wrong.”

Working at the city’s water department has taught Briggs a valuable lesson, too.

“We think about electrical power and the linemen out there making it happen,” she said. “But you know something? The water folks are out there, making it happen, too, keeping the generators going. And even when you lose electricity, you still have your water — as long as you pay that bill. We turn on those faucets and we expect the water to come out and it does. If they aren’t working on a main on your street, you wouldn’t even know if there was a problem. The water is always there. Think of how hard it would be to do without it.”

And when people, as people will do, complain about hikes in their bill, Briggs says they need to remember something: “The water works requires upgrades and improvements just like everything else and that costs money. You have to cover it somehow.”

While she spent her final year helping train her successor, Briggs knows from experience some things just have to be learned on the job. She added that the City of Greenville’s Water Works Department is a good place to learn and work.

“I told them before I left — that feeling of family we always had there, they must be sure to keep it going,” Briggs stressed. “After all, your workplace is where you spent most of your waking hours, so make it a good place to be. There’s a really good group of people there now.”

And now that she has retired, just what does she plan to do?

All kidding aside, Briggs says she plans to spend time with her two sons, Marcus and Woodrow, who both live in the Birmingham area, and get a chance to spoil her three grandsons and granddaughter. She also hopes to take in some of her great nephew’s traveling baseball team’s games.

“I do serve on a couple of boards here in town and I am the secretary of New Bethel Christian Church,” Briggs concluded. “I think that will keep me busy. And I will just have to start checking out what’s going on around town to see what I might have been missing. Mostly — I think I am just going to chill.”