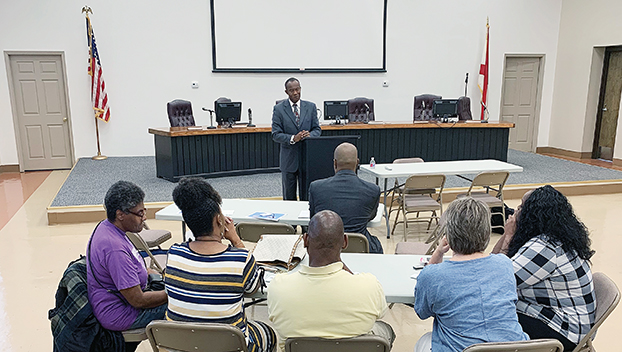 Could bus or van transportation be made available for Greenville and Butler County residents to get to work or travel to shop and go to the doctor?

Wiley Brooks, lead transit coordinator for ALDOT, spoke to the crowd of more than a dozen people who came to look at options for Butler County.

“This is the same type of program you’ll see in Montgomery or any larger city – except it’s rural,” Brooks said. “The program started back in 1979, and in the late 80s, ALDOT was designated to administrate it. We take the federal funds and follow the guidelines they give us.  Grants are awarded to local communities and we provide the federal share. Local governments provide the other share. The State of Alabama does not participate with funding.”

To operate the transportation systems (administrative costs) the federal funds provide for 80 percent of the amount and local governments are responsible for 20 percent. Often, the 20 percent is made up from fares on buses or vans.

Brooks said the goal of the program was to enhance the quality of life for residents by providing passenger transportation service in rural and small urban areas, where desirable and feasible, to facilitate great access to needed goods and services. Elements of feasibility including funding availability (local match funding), population density, minimum population and significant demographic issues such as the number of elderly persons with disabilities, unemployment rate, personal income, and distance to services.

“The way to get started is to make grant applications,” Brooks said. “We’ve got 16 counties we’d love to have come forward and Butler County is one of them.”

Brooks said the vans or buses, as they are called, are often 15-passenger vehicles.  When in service, they give an opportunity for people who do not have transportation to employment a way to get to work.

“It’s an opportunity to make their lives better,” he said. “Businesses will locate where there is public transit. We can also work with workforce development programs.”

ALDOT provides the training at no cost to the counties.

“It works best if the city and county partner together,” Brooks said. “They can have dedicated matching funds. The only people who can make the applications, however, are governmental agencies. You have to have either the city or county on board — preferably both.”

“This is needed,” he said. “The city and county could benefit from this.”

Crum said the group was a grassroots organization that has been around for around two years.

“We have four components to our mission,” Crum said. “Education, the elderly, political and economic. We try to advocate for and address the needs of the community. We’ve been very successful. We do voter registration events and we’ve done mentoring in the Butler County School System. We just wanted to know what it would take to get public transportation in Greenville. We thought our community could take advantage of this.”

Crum said the group meets the first Tuesday of each month at a variety of locations.

“I know transportation like this could benefit Butler County,” he concluded. “We are going to try and have these presentations during the city and county
meetings.”