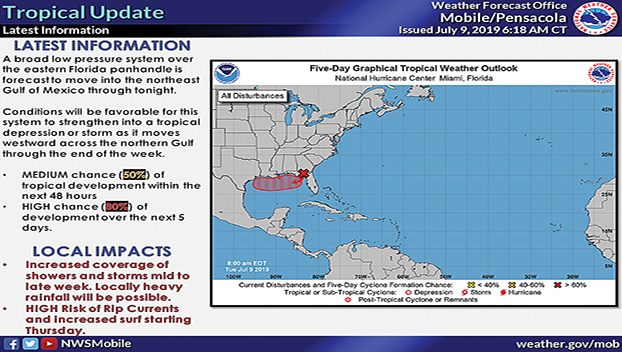 Heavy rain from a tropical depression could hit Butler County in the next few days.

Butler County Emergency Management Director Kris Ware said the National Weather service had increased the potential for tropical cyclone development in the northern Gulf of Mexico to 80 percent in the next several days.

According to the National Weather Service in Mobile, the broad low-pressure system they were monitoring earlier this week was located across the Florida panhandle Tuesday morning.

“Conditions will be quite favorable for this system to strengthen into a tropical depression as it moves westward across the northern Gulf late Wednesday into Thursday,” the National Weather Service released in a statement. “Confidence on the track of the storm remain fairly low from Friday onward, as there is potential that the system could either continue westward toward the upper coast of Texas/southwest Louisiana or possibly take a more northerly turn into southeastern or southern Louisiana.”

The National Weather Service said Butler County and most of south and central Alabama should expect increased coverage of showers during the middle and latter half of the week. Currently the main concern is the potential for heavy rainfall, especially near the Coast.

The storm will also likely bring rip currents to the beaches along the Coast beginning Thursday and continuing through the weekend.

“Should the system turn to the north into southeast Louisiana, this could maintain the potential for heavy rains through Saturday and also introduce the potential for coastal flooding with a slow, but gradual water level recession into Sunday,” the NWS statement concluded.