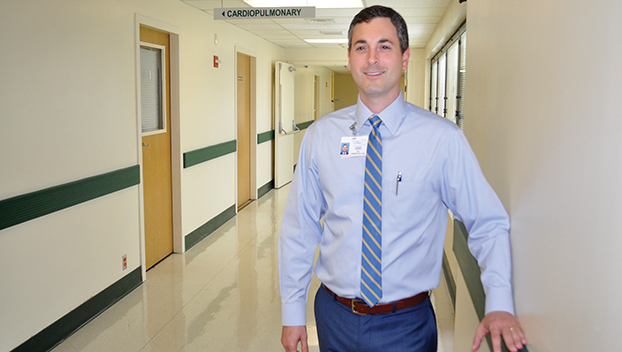 It’s been more than two months since Chad French became the new CEO of the Regional Medical Center of Central Alabama.

French, who arrived in town along with his wife, Jackie, who will teach at Fort Dale Academy, and sons, Gus, 12, and Luke, 10, has been busy since his arrival. The CEO shared his experiences and information about himself with the Greenville Lions Club Monday.

French is from Elizabethtown, Kent., and began his career in the insurance business. He received his bachelor’s degree from the University of Kentucky.

“I got out of school and started working in my hometown selling some insurance,” he said. “I was an insurance agent for almost two years, but a lot was going on in healthcare. My mom was a dietician at the local hospital. I was kind of questioning things — it was around 9/11. My mom said I should talk to the hospital administrator. He ran a 300-bed hospital. His name was David Gray and he was very accessible.”

After spending an hour with Gray, French thought the job of hospital administrator was an interesting one.

“I knew I always wanted to go back and get a master’s degree in business, and a school in Cincinnati, Xavier University, had dual program where you get a master’s in business and a bachelor’s in healthcare at the same time,” French said. “That’s where I went and then I did a fellowship at Centennial Medical Center, a 650-bed medical center in Nashville.”

After that, French enlisted in the Navy.

Since then, French has worked for a variety of companies as a hospital administrator.

“I worked with Community Health Systems, which at one time owned L.V. Stabler Hospital here,” he said. “I went to Lake Charles, La., for a couple of years and then, when I was 32, I was offered a CEO position in Kentucky. I went back to Kentucky for four years and then I went to North Carolina for four years as a CEO of a small hospital there. I worked in my family business for a little while too.”

Then the position in Greenville opened up and French had a strong interest in it.

“It looked like a tremendous opportunity,” he said. “My wife grew up in Alabama — she did not like Elizabethtown, Kent. She grew up in the Birmingham area and she’s got family in Montgomery. I’ve been dragging her around for a long time. I liked the idea of coming here.”

French said he’s hopeful he can remain in Greenville for a long time.

“I want to stay for my kids,” he said. “I grew up near Fort Knox and we saw kids go in and out of there all the time. I never had to worry about that. But for me, my oldest son has lived in six states now. I don’t want that for them. I hope we can stay here for a while. That was one of the reasons I was drawn to the opportunity.”

Another reason is that French is pleased is the hospital’s affiliation with UAB.

“It’s a big deal,” he said. “I’m a UAB employee. UAB offers us some opportunities to serve the community with telemedicine. For example, we wouldn’t be able to have a pulmonologist on staff, but UAB can. There’s somebody on the other side to help us anytime we need them. We began the TeleStroke program last month. Last month, 10 patients in the emergency room were helped by this service. If they don’t get immediate care for a stroke here, they could be in trouble.”

French said he and the staff at the Regional Medical Center are committed to having the best healthcare for Butler County residents.

“Our goal is to have less people leaving the county for basic stuff,” he concluded. “We will also be adding new equipment. We’re working to cut losses and get new equipment and get us where we need to go. The future is very bright.”