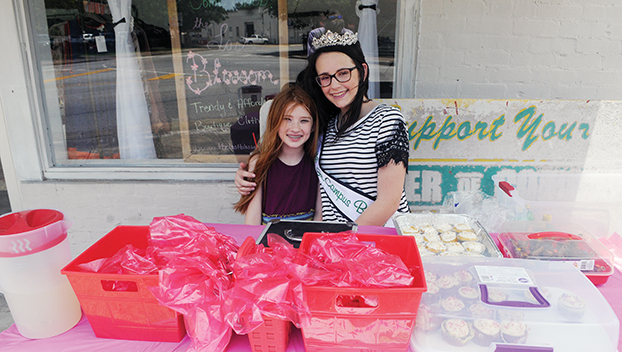 If you drove by the Butler County Courthouse last week, you might have seen two young girls selling baked goods.

The pair, Nolleigh Reaves, 13,  and her cousin, Annabelle Morris, 9, endured high temperatures outside to sell a variety of tasty treats to passersby.

“We’re raising money for my friend — she was involved in an awful accident,” Reaves, who is Junior Campus Beauty at Brantley High School, said. “She’s been hospitalized at Children’s Hospital in Birmingham. We’re trying to raise money to help her family.”

The table they sat at had a variety of homemade cupcakes, chocolate chip brownies, oatmeal brownies and, of course, ice cold lemonade for a hot summer’s day.

“We’ve been out here all day,” Reaves said Thursday afternoon.

Reaves and Morris, who is Miss Independence at Brantley, said they were working hard to help their friend Stoney Odom.

“We’ve had a lot of customers today,” Reaves concluded. “We’re impressed by the customers and the donations we’ve received.”