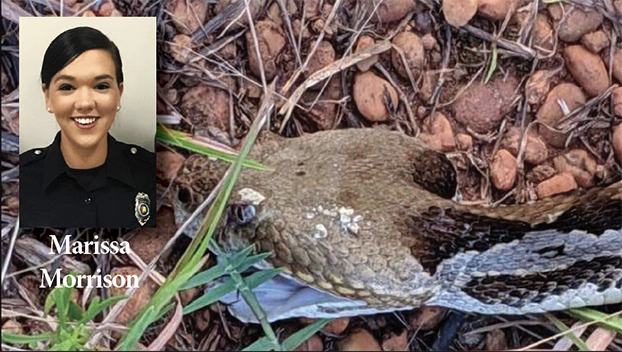 The head of the rattlesnake that bit Greenville Police Department officer Marissa Morrison is pictured shortly after it was "dispatched." | Submitted Photo

Marissa Morrison says she was once more afraid of spiders than snakes.

Things changed early Monday for the two-year veteran of the Greenville Police Department when she was bitten by a large timber rattler near the Greenville Airport.

Morrison is currently recovering in ICU at Jackson Hospital in Montgomery after receiving more than 15 vials of antivenin and spoke about her experience and treatment late Wednesday afternoon.

“I worked all weekend,” the GPD’s only female officer said. “I work the 6 p.m. to 6 a.m. shift. It was about 5:15 a.m. – toward the end of my shift – and I parked out near the airport to finish paperwork. I often go out to the spot for the peace and quiet before we have a meeting at the end of our shift.”

Morrison finished paperwork and was at the rear of her cruiser and decided to take a picture of the sunrise when the snake struck her.

“I was about to get in my vehicle when I felt him hit my left leg,” Morrison said. “I heard him rattle after he bit me. I screamed. I immediately got on the radio and called out. My unit number is 209, and I said ‘209 to 911 and 203 (Cpl. Jimmy Oliver) I’ve been bitten by a rattlesnake.’ I know they heard the panic in my voice.”

Shortly after making the distress call Oliver and officer Tom Powell arrived on the scene. Morrison said Oliver knew right where to find her because she often goes to that spot. Oliver arrived before an ambulance could and loaded her up in his cruiser and rushed her to the emergency room at the Regional Medical Center of Central Alabama in Greenville.

“If it wouldn’t have been for my guys, I don’t know where I’d be,” she said referring to her fellow officers. “I owe them my life. My corporal (Oliver) had to carry me into the hospital. I was in so much pain and my leg was swelling. From there I was rushed to Jackson Hospital. I’m so thankful. I’d do the same for them.”

Morrison’s fellow GPD officers went back to the scene and found the snake still coiled and rattling. They “dispatched” the snake and brought her the rattles after making sure hospital personnel didn’t need the deceased reptile.

Morrison said Wednesday night that the road to recovery is expected to be slow.

“I’m getting out of ICU tonight and going to a private room,” she said as the sounds of monitors beeped in the background.

“They’ve had me up trying to walk and I’ve been trying to put pressure on it (my leg),” Morrison said. “I can’t bend it much. The bite mark is about 1 ½ inches wide – he had a huge mouth.”

Morrison’s expected to remain in the hospital for the rest of the week, but is anxious to get home to her three children, ages 8, 7, and 3 months.

“I want to get back to my kids and my guys (on the police department),” she said. “They say it could be a month, but I’ll push myself – it’s one of my characteristics. I’m going to do all I can to get back.”

Morrison acknowledges that she could have died from the bite.

“When they finally finished, I’d made it to 16 vials of antivenin,” she concluded. “My doctors have been in touch with poison control. Jackson Hospital has been amazing. You hear about stuff like this, but it never happens to you. I’m so thankful for my co-workers. I love my job and I can’t wait to get back out there.”