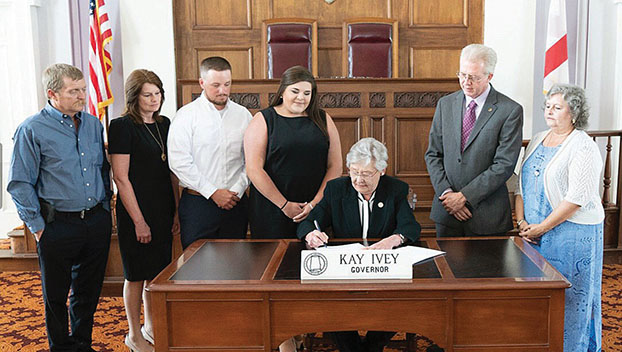 A section of highway south of Greenville was officially named for a man who was killed there three years ago.

Gov. Kay Ivey signed the bill, which names Mile 123 in honor of Gene Schofield Jr., a tow truck operator and resident of Fort Deposit, who was hit and killed by a drunk driver on Interstate 65 near that location in 2016. The naming of the section of highway is just the latest in a series of safety bills introduced by Rep. Chris Sells and Anna Findley, Schofield’s sister, who has campaigned for safety laws since his death.

“Since the accident, we have been raising awareness for the Alabama Move Over Law,” Findley, a resident of Greenville, said. “Last year, Chris Sells and I put together a bill, which would revise the Move Over Law, adding ALDOT and stranded motorists to the law. Thankfully, it passed in 2018 and took effect on June 1, 2018.”

This year, two more related bills were introduced, according to Findley.

“One would dedicate Mile 123 to Gene as a memorial highway and the other would increase the Mover Over Law Fines,” she said.

“I want to personally thank Mr. Chris Sells for his dedication to this campaign,” Findley said. “He has been so motivated to help our family and I can’t thank him enough for all that he has done. We are so lucky to have such a wonderful, determined State Representative.”

Sells said he was proud to have been the sponsor of the bills and pleased they passed.

“I’m humbled to be able to honor his memory with this resolution, and I look forward to continuing to strengthen the Alabama Move Over Law to raise awareness and prevent tragedies like this in the future,” he said.

Findley said the signs naming the highway could cost up to $5,000 and her group is currently working to raise funds. Those wishing to donate can do so via PayPal at annafindley.moveoverlaw@hotmail.com or the Go Fund Me page.

“Since we began this campaign, we knew we wanted to have Gene’s name remembered,” she said. “Having a Memorial Highway in his name is such an honor and something we will cherish forever.”

Sells was also a part of another piece of legislation designed to keep motorists safer, a law that requires all occupants of a vehicle to wear a seat belt.

The bill was named after Roderic Deshaun Scott, the Robert E. Lee High School basketball star from Montgomery who died after a car crash in 2016. Rep. Kirk Hatcher, D-Montgomery, joined Sells on the house floor in urging final passage.

“National data show us that seat belt use and compliance with seat belt laws may be the most effective safety measure we can take,” Sells said. “Now Alabama’s seat belt law will truly reflect the importance of seat belts in highway safety.”

Alabama law since 2000 has required use of seat belts by front seat vehicle occupants. The law had not addressed seat belt use in rear seats by occupants over the age of 15.

Rear seat passengers in a vehicle are three times more likely to die in a crash if they are not wearing a seat belt, according to the National Highway Traffic Safety Administration.