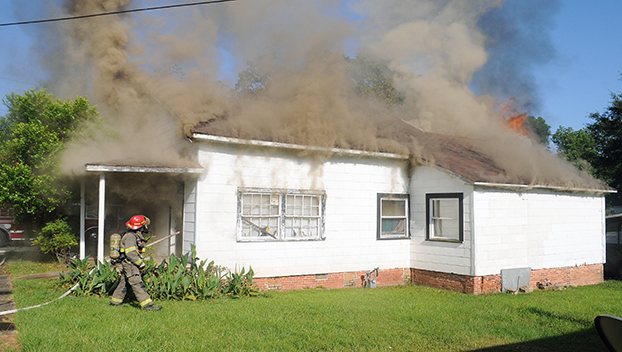 Firefighters with the Greenville Fire Department arrive on the scene of a structure fire at the corner of South Pine and Dunklin streets Tuesday afternoon. | Photo by Mark Rogers

Shortly before 5 p.m., with temperatures hovering in the mid-90s, the Greenville Fire Department was dispatched to the corner of Dunklin and South Pine streets to a report of smoke coming from a residence. When firefighters arrived on the scene, heavy smoke was pouring from the attic and as they broke into the doors smoke poured out as flames vented through the roof.

Two engines and a full shift of firefighters worked the scene and got the flames under control by 5:30 p.m.

Firefighters remained on the scene to nearly 8 p.m. checking for hot spots and investigating. Greenville Police Department units blocked both South Pine and Dunklin streets. In addition, Southeast Gas and Alabama Power Company crews were dispatched to the scene.

No one was reported home at the time of the fire. No injuries were reported.