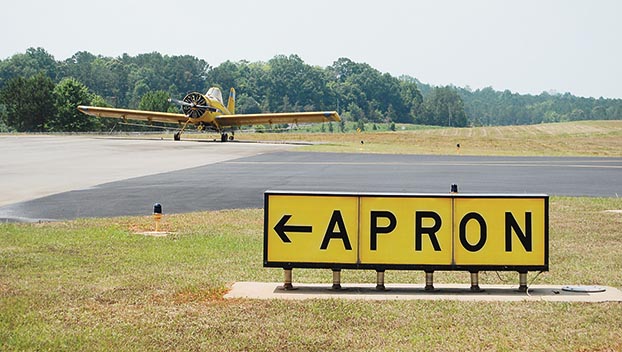 The cities of Greenville and Luverne are working together to save on airport fuel costs by “splitting” a load of fuel. The measure was OK’d during Monday’s Greenville City Council meeting. | File Photo

Two neighboring municipalities are working together to save taxpayers money following action by the Greenville City Council Monday
afternoon.

Greenville council members unanimously agreed to pay Perry Brothers Aviation Fuels $29,583.19 — a non-budget expense — for use at the Mac Crenshaw Memorial Airport. However, the recently updated facility’s tank is unable to hold a full load of fuel, so officials are sharing the load with the City of Luverne.

“Our airport, Luverne and Evergreen — our tanks — won’t hold a full load when you purchase one, so in order to get the best price we split a load normally with Luverne or Evergreen and then they’ll reimburse us for that fuel,” City Clerk Dee Blackmon said.

Once delivered, the City of Luverne will reimburse Greenville $11,147.44 for its share of the load.

“You get a better price,” Mayor Dexter McLendon said. “Remember, we will also be selling this fuel, so it’s an investment. We’ll make money off this.”

The Council also reimbursed Travis Capps, former airport manager, $1,696.68 for fuel left in the tank that he purchased. Also included in the amount was phone and fax equipment.

“He had already purchased fuel and there was about 432 gallons of fuel left in the tank out there and this is to reimburse him for that as well as the phone and fax system that they already had in place, he offered to let us purchase that for $80,” Blackmon said.

Other non-budgeted items approved Monday included $7,500 to Southern Roofing for repairs to the low sloped area at 121 W. Commerce St., the building occupied by Camellia City Bakery. The city rents the building out to the downtown restaurant. Also, $1,761 was OK’d for payment to Insurance Solutions Group for insurance for a new CAT 963K T Loader.

“We had contracted with Thompson Tractor to get a new track loader for the landfill and we had already got all of our information together and the proposal done for insurance solution group prior to this being delivered, so they had to add this once it was delivered to us,” Blackmon said.

The council also acted to clean up properties in violation of the city’s weed and debris ordinance. They first granted five-day extensions to the following property owners to have their properties cleaned, Willie Brooks, James Brooks Sr. and Linda G. Brooks, 408 Thames St. and Larry Peagler, 511 S. Park St. and 909 Walnut St.

Councilmembers also voted to take the “next step” with properties owned by Murphy Rodney, 807 Oak St., and Palmer and James E. Peter, Government and Bolling, authorizing cleanup by city personnel.

“They’ll be getting cleaned up and we’ll send them a bill,” McLendon said. “The others will be given five more days and they feel like they can get it cut.”

The council will meet again at 5:30 p.m. next Monday for its next regular meeting. The meeting was rescheduled from
May 27 when city offices are closed in observation of Memorial Day.