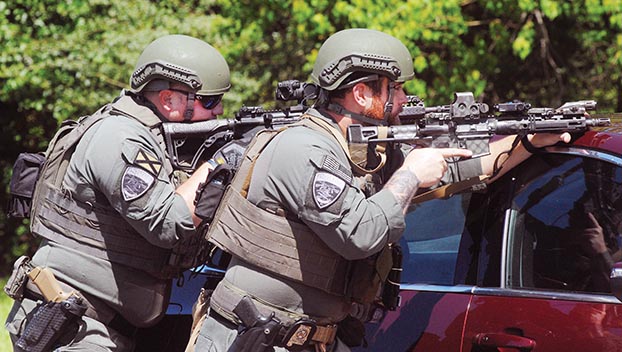 A dispatcher is shot and another held hostage. Across town, a bank robbery takes place at the same time and officials must react.

A week ago, officials prepared the scenario of having a hostage situation and a mass casualty incident at the same time. Senior law enforcement officials videoed the process and took notes as observers as the Emergency Response Team was called into action.

Heavily armed Special Response Team (SRT) officers surrounded the 911 Center on Conecuh Street after the simulated report of a shooting. The driver of a simulated bank robbery had headed back across town to pick up her accomplice at the 911 Center. However, armed officers were ready and she was quickly subdued.

Across town at a location of the Greenville Bypass, officers, firefighters and paramedics treated six simulated gunshot wound victims and transported them to the hospital for treatment.

The objective of the exercise was to better prepare agencies to work together during a crisis. Officials were working to piece together reports and figure ways to conduct maneuvers more efficiently.

Officials may conduct more exercises in the future.