Course aims to help with shortage in logging personnel 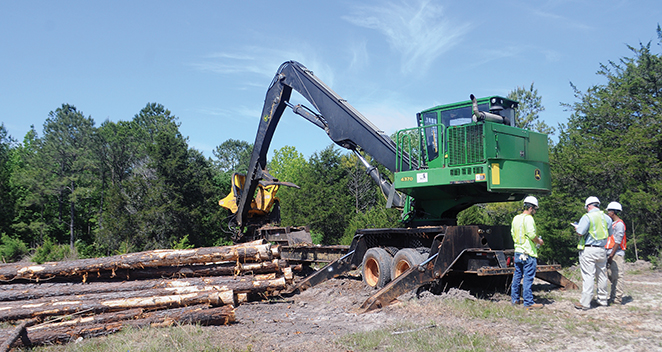 Students learn to use a variety of logging related equipment during the four-week course. | Photo by Mark Rogers

The forestry industry is Alabama’s No. 2 industry and yet it faces a shortage of manpower.

A course presented by the Forest Workforce Training Institute in Butler County is part of a plan to produce the loggers and certified personnel of the future.

The recent training held on sites in Butler and Lowndes counties featured classroom time at the Greenville Campus of the Lurleen B. Wallace Community College. Students spend four weeks training and working on logging sites to prepare for the workforce jobs that in Alabama pay a median of $23 per hour.

“A consistent them that we hear in the industry is that ‘we can’t get good help,’” Ray Clifton, director of training for the Forest Workforce Institute said. “Much of the help is older people and there aren’t many young folks going into the business. Throughout the industry, 55 percent of the logging workers are over 50 years old. Only 5 percent are under 30 years old and we’re going to have a real big gap coming up here in the next 10 years as people start to retire out of the industry. I know folks in logging and trucking that are working way into their 60s and some into their 70s. There just aren’t young people coming in.”

The training courses came out of discussions with logging professionals about the difficulty finding workers for the industry.

Locally, Clifton says the program could be very important.

“When you get in a county like Butler, which I consider to be mostly rural, many kids don’t have the opportunity to go off and get an education because all there really is, is forestry and agriculture,” he said. “It’s like that in much of Alabama.  We want to give them training so they can work where there are a lot of crews where there are going to be a lot of jobs, where these employers need help.”

The programs are held across the state and thanks to state grants, the schools kicked off last year.

“We had three session last year,” Clifton said. “We had one in Chambers County, in Lafayette and Winston counties and we also had one in the fall in Wetumpka. The one in Butler County was our first session this year. In a few weeks we will have several other schools across the state. We pick the locations based on community support.”

“He said they would love to have us come to Butler County,” Clifton said. “We met with some key folks and talked about it and gauged the support and that’s why we’re here. We’ve enjoyed being here.”

Clifton spoke about what the students in the program do when they get involved.

“It’s a four-week program that allows us to do three things that loggers said they wanted out of a training program,” he said. “The first is that they receive their professional logging manager qualification.  That is a series of courses that loggers have to have to be able to haul wood in Alabama.  One person on every site has to have that designation. The coursework is to help that person understand sustainable forestry. They learn how to preserve water quality; best practices, recognizing species and how to treat them. It includes basic forestry principals.”

The class is also able to go out and see and experience the things they learn in the classroom on site.

In this case, the class members traveled to a farm in nearby Lowndes County off Alabama Hwy. 263 to work in the field.

“The beauty of what we’re doing is that we can tell and go show,” Clifton said. “No. 2, loggers said they wanted their people to know CPR and first aid certifications. It’s required on every crew and makes them job-ready. The third piece of the puzzle is some time driving the machines.”

The trainees learn to be a part of a three-man crew, operating all of the machinery.

“They are able to jump on another machine if someone is out,” Clifton said. “They can operate the skidder, loader and the bulldozer. They’re not 100 percent production ready when they come out, but they’re going to be smart, they’re going to know all the rules and they are going to have a basic knowledge of how to operate the equipment. We also teach them to be on time every day and to show up every day. It’s real challenge these days.”

Greenville Mayor Dexter McLendon had the opportunity to see the program in action and was impressed.

“I think it’s a great, great program,” he said. “I believe that college is not for everybody. This is an opportunity. If you put your passion and everything in it you can be successful. It’s all about work. We’ve got to have people on the ground that have to work. The more you put in to something, the more you get out of it.”