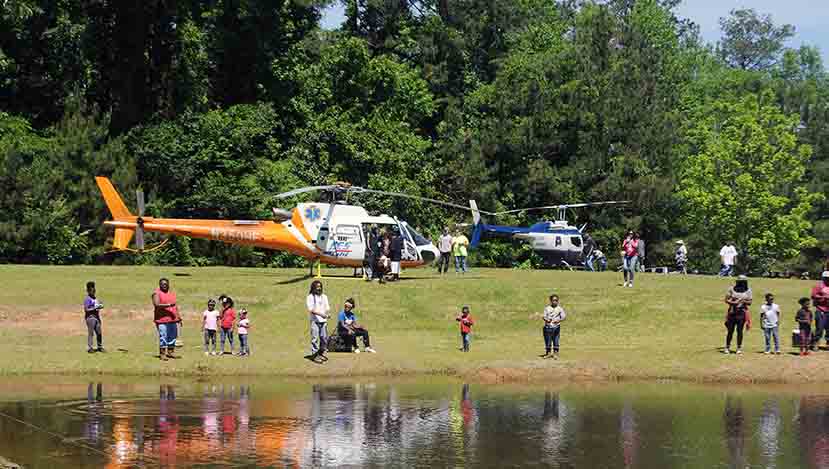 Last Saturday was a beautiful day for fishing in Georgiana, but the annual Georgiana Police Department Youth Fishing Day was so much more for the participants.

On a lake donated for use by its owner, Douglas Harris, on North Jane Avenue, young and old alike joined to help children and youth enjoy the day. Those in attendance also got to hear several testimonies from people who had once been on the wrong side of the law and said that with God’s help they were able to change their lives.

Cook said the event was deigned to bring people together.

“It’s about building relationships in our community,” he said. “We want everybody to know that our first responders are your friends. They are there to help you. Our fire department personnel are there to help you. We’ve all got to work together to make our community better. It’s not just the first responders’ job to do; it’s all of our jobs to do.  There is nothing we can’t do together.”

Cook told the youth at the event that if they fell, they could always get up.

“You’ve got to keep faith,” he said. “God has called me to be a servant of him. I’ve got some people with me to share and give a few words of what they went through so you can learn.”

Inet Jackson shared part of her story, which included prison.

“I wanted to let you know that God is so awesome and he is worthy to be praised,” she said. “You’re looking at a testimony here today. I’m 50 years old and for 30 years of my life, I battled with crack cocaine. I was rebellious and hardheaded.“

Facing the possibility of life in prison, an attorney told her God was not going to help her. She went before the judge and her life began to change.

“God was my judge that day,” Jackson said. “I was sentenced to three years. I was worried and a Bible verse was given to me when I was in the county jail. Jeremiah 29:11, ‘I know the plans I have for you, thus says the Lord.’ Plans to give you a hope and a future. God had exactly what I needed when I needed it.”

She said after the death of her daughter, she began to seek God even more.

“I have been clean ever since (prison),” she told the audience. “I now do jailhouse ministry at the Butler County Jail and I have been since 2015. I also chair the NA (Narcotics Anonymous) meetings at the house next door to the jail I just wanted to let you know that God will do what he says he’ll do.”

The crowd also heard a similar story from Willie Mack, who told of prison terms and violence in his life. Mack urged the crowd to find Jesus and follow him.

After the presentations, more than 100 children and youth checked out displays from fire departments and law enforcement including helicopters from the Alabama Law Enforcement Agency and Haynes Life Flight.