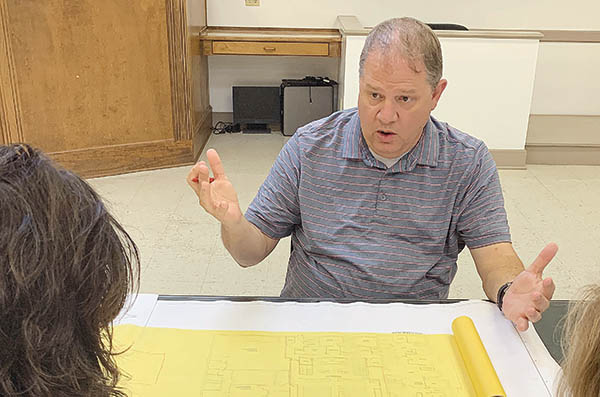 “We need to make a decision on which direction to go,” Jones said as he showed plans to those in attendance. “We’re trying to get to a point where we have a project.

Butler County is looking at an approximately $800, 000 to $850,000 renovation of the Courthouse Annex, which will house more county and court offices following the work. Officials are also concern with any renovations done in the courtrooms, whether in the courthouse or the annex.

Once concern for courtroom renovations is the acoustics and the ability to hear conversations during trials.

“It’s a matter of design,” Jones said. “Wall panels will focus the sound on the judges and attorneys. We would use an angled design. You would also have to look at the sound systems.”

Committee members investigated the possibility of installing an elevator in the annex but were concerned when Jones told them it could change the project cost to more than $1 million.

“We only have so much space and so much money,” Commission Chairman Joey Peavy said.

Commissioners said they have already obtained a grant for the installation of an elevator at the courthouse itself. The concern was providing handicapped-accessible access to one of the courtrooms. Currently, trials that need special access are held in the annex.

Jones told the group he would bring back a new set of drawings designed to reflect on the suggestions of various committee members, including ones for the installation of the elevator in the Butler County Courthouse itself.

The next meeting of the Butler County Courthouse Renovation Committee is set for 2 p.m. on Friday, May 17 in the Courthouse Annex.

Storms rip through area, cause damage