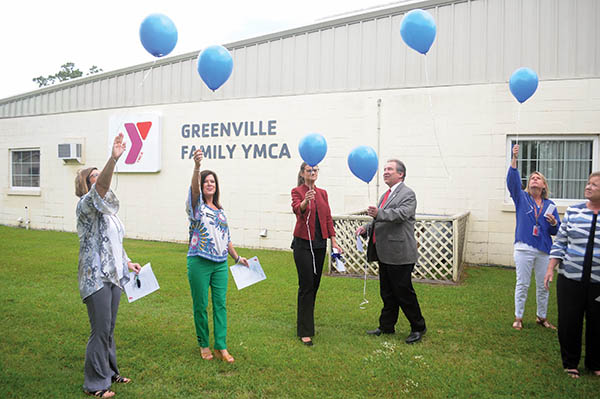 April was Child Abuse Awareness and Prevention Month and several local entities teamed up to get the word out about the problem of child abuse in Butler County.

On April 25 at the Greenville YMCA, representatives from the Butler County Multiple Disciplinary Team gathered at the Y to talk about the issue and hold a balloon release to draw attention to the problem. Butler County Multiple Disciplinary Team in comprised of members from Safe Harbor, the District Attorney’s Office, Department of Human Resources and local law enforcement. The group is working together to learn more about what they can do to help child in abusive situations.

“We’re going to try and make this a little bit bigger every year,” Tina Caver of the Greenville YMCA said. “We want to raise awareness. We have pledge cards and wrist bands to wear.”

On the pledge cards, signees are asked to pledge to use their voice to let other adults know that protection is our responsibility, to be a trusted adult to children, to know the facts about child sexual abuse, to be an active bystander if they see someone crossing boundaries, to insist organizations in the community have protection policies and to change our culture to be one that protects children and puts them first and to protect children from sexual abuse.

DA Charlotte Tesmer shared sentences that abusers in the area had received.

“One sexual abuser received 45 years for a sodomy case,” Tesmer said. “We finally brought to trial Deandre Lee, who had murdered two young children (and an adult in Lowndes County). He got six life without parole sentences. We also had one in Butler County where the victims were adults when we tried the case. The abuse took place over several years when they were younger. He received four life sentences plus 140 years. We also had a case here in Butler County where tow young children were horribly abused. We received two life sentences and 160 years on this. Because of some of his charges, he will serve 20 years day for day. The parole board cannot let him out before then. Through the work of the team in all of the counties we received those sentences and we’re proud of the sentences.”

Greenville Police Chief Justin Lovvorn said he began work with the team when he was an investigator.

“It’s been an invaluable resource to us,” he said. “Our future is in our children and we’re not taking care of them, we’re not taking care of our future.  To put things together in one place with Safe Harbor, the District Attorney’s Office and DHR and to have everyone cooperating not only makes for a very solid prosecution. But it ensures that the victim’s are getting everything they need. We’re proud to be a part of this and to support all of these other agencies.”

“We’re thankful that the YMCA had a national initiative during this month to bring awareness to child abuse issues,” Smith said. “We conduct forensic interviews, and have counseling and therapy session for children that allege abuse and harm in some way or are witnesses of crime. We do that in a childfree independent setting. We do this to ensure the safety of the child.”

Safe Harbor recently invested $13,000 in a video monitoring system to help with investigation and prosecution of cases.  Part of the funding came from a state grant but matching funds come from fundraisers in the area.