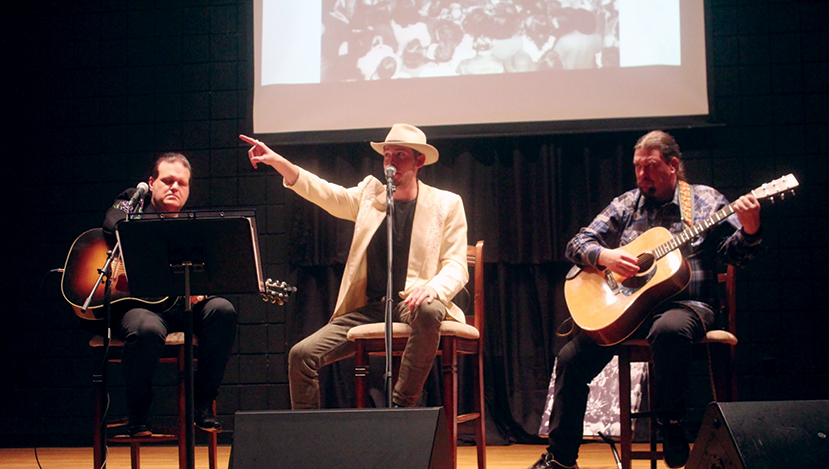 Last Thursday evening’s Bobby Tomberlin and Friends concert at the Dei Center in Luverne was, in many ways, a nostalgia-filled hearkening back to the traveling country music shows of the early-to-mid 20th century.

This impression was made all the stronger by the presence of up-and-coming artist Sam Williams, an heir to the famous country clan indicated by his surname.

Charity Bowden, a former contestant on TV’s The Voice, opened the evening by introducing and performing several originals.

Tomberlin and Williams went on to perform for over two hours, alternating between originals, covers of songs by Williams’ father and grandfather and renditions of songs Tomberlin has written for other artists.

The two, accompanied at times by guitarist Tom Vrem, were flanked by a projected black-and-white photo of Hank Williams Sr. performing at a Chevrolet dealership in Luverne, a copy of which was gifted to the younger Williams at the end of the night by event organizer Lisa Rolling.

A packed Dei Center audience resembled the crowd surrounding the elder Williams in the photo in a way, enjoying every note and story told between songs.

An air of a “working performance” and spontaneity was bolstered by Tomberlin and Williams regaling the audience with a tale of their recent show in Michigan that ended with an unpleasant encounter at a diner/bar afterwards, which they followed up with a song about the story.

Williams also a played a song he claimed to have written the previous day.

The show was a homecoming for both Tomberlin- a Luverne native and Williams who, as a son of Williams, Jr., was born and reared in Tennessee.