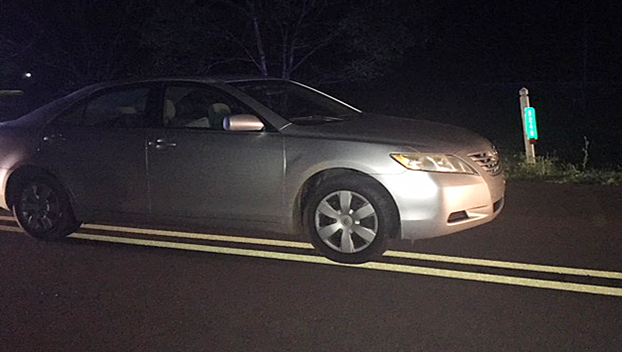 This 2007 Toyota Corolla was driven by Dusty Eugene Scott of Mayfield, Ken. during the pursuit. | Submitted Photo

An attempted traffic stop turned into a pursuit that led to the arrest of a Kentucky man and the recovery of a stolen vehicle in Georgiana earlier this month.

“He saw the driver pass several cars and run the stop sign,” Cook said. “When they ran the tag, it was a stolen vehicle out of Gulf Shores. Sgt. Golden got in a pursuit going southbound and notified Conecuh County and the Evergreen Police Department. The driver kept opening his door and officers thought he had a gun.”

The pursuit headed next to Butler County Road 32 when the 2007 Toyota Corolla stopped in the middle of the road in the 8200 block of County Road 32.

“The suspect then fled on foot and ran behind a residence,” Cook said. “We called the tracking dogs from the prison in Atmore to come out.”

After the dogs arrived, officers from multiple departments located the suspect, Dusty Eugene Scott, 28, of Mayfield, Kent. and took him into custody. Scott was charged with reckless endangerment, attempting to elude and receiving stolen property 1st.

“It was a good cooperative effort by all of the agencies,” Cook concluded.

No bond information was available.