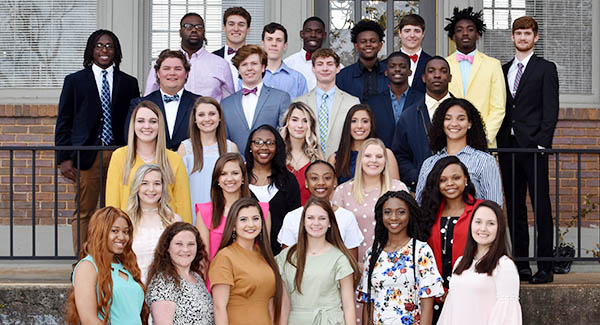 The 22nd Annual Achiever Award Banquet will be held at 6:30 p.m. on May 2 at Lurleen B. Wallace Community College’s Wendell Mitchell Center. | Photo by Kathy Pickens

It’s time for the annual Achiever Award winners to be presented and tickets are still available for those that want to see the area’s top high school students vie for the honors.

This year there are 31 nominees for the two awards, according to Salter.

Interviews were held at the Chamber offices earlier this month. The 31 interviews took a full day.

“All of the judges are out of town judges,” Salter said. “They do not know the nominees, they do not know their parents — they know nothing about these students. The day of the interview is the first time they every see the students. Everything else they have is just paper, resumes and transcripts. They have no idea who the students are other than what they received in their packet.  The judges have to meet and decide. It’s a tough job. There are so many great nominees in this program.”

Winners were selected the day of the judging and will be announced at the banquet on May 2.  The event will be held at the Lurleen B. Wallace Community College’s Wendell Mitchell Center. The banquet begins at 6:30 p.m. and tickets are on sale for $25. Tickets include a catered meal by Wintzell’s Oyster House, a guest speaker and recognition of each of the nominees.

“We’re super excited about having Coach Hall come to Greenville,” Salter said.  “He was very successful on the field when he played for Alabama. He has been very successful in his coaching career and he is excited about coming back to his home state to visit. He’s excited to be able to do this for our high school youth.”