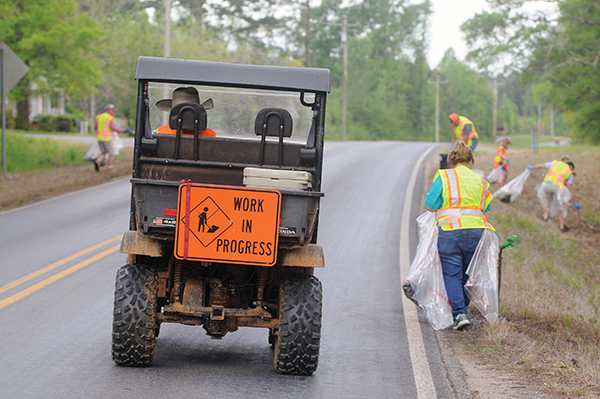 Several volunteers work both sides of the roadway, filling dozens of bags with litter. | Photo by Mark Rogers

Spring is a time for driving through the countryside and seeing flowers and trees in bloom. It’s also a time when roadside trash becomes noticeable and abundant.

Groups of volunteers are teaming up across Butler County and working to clean areas along county roads.

For the past two weekends, volunteers have been out picking up trash and soon more events are planned as the 2019 “Don’t Drop It On Alabama” spring cleanup gets into full swing.

Peavy and fellow Commissioner Darrell Sanders are looking for more volunteers for a future effort. Both mentioned the cleanups in last week’s Butler County Commission meeting.

“We’re making a big push for April 27,” Peavy said. “We want to get several groups out for the ‘Don’t Drop It On Alabama’ cleanup. Anyone interested can contact me or any other commissioners and we’ll be happy to help get it together in your community.”

Sanders mentioned efforts in the McKenzie area for April 27.

“There is a lot of litter around the county,” he said. “We’d like to have volunteers help out. We’ll be organizing at least one cleanup on April 27 in the Dogwood Trail area from 7 a.m. until 9 a.m.”

Volunteers started their day last Saturday with a brief safety meeting and then donned bright reflective vests and headed out on the roads.

“It’s our first year to really push this,” Peavy said as he walked along Shackleville Road early Saturday. “I want to thank Sheriff Danny Bond because he’s coming out to haul all of this stuff to the landfill.”

Volunteers headed to the intersection of Alabama Hwy. 10 and headed back down Shackleville Road toward the Buckaloo Pentecostal Holiness Church. The second group, which had also cleaned areas the week before, began at the BS&W Volunteer Fire Department.

“I’d been seeing trash along the road and I contacted to Joey and said we needed to do it along our road,” Troy C. Stinson said as he and his children, Aubrey, 5, and Parker, 8, picked up cans, bottles and other trash along Shackleville Road.

PALS, People Against a Littered State, are helping coordinate efforts statewide. The bags for the Butler County cleanup came from the group.

PALS officials said they have distributed more than 190,000 bags statewide for the efforts. Last year, more than 600 tons of litter was collected in 65 counties that participated.