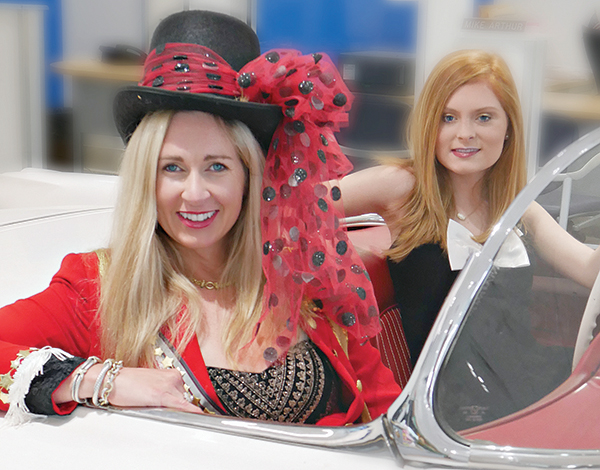 Ringmaster Jennie Hamilton and performer Ann Kathryn Smith, both veteran Ritz Players, are ready for “Putting on the Ritz.” | Photo by Angie Long

It’s one really big show and it’s rolling into town next week.

Putting on the Ritz, the musical fundraiser for the Greenville Area Arts Council, is slated for Thursday, Friday and Saturday nights, April 25-27 at the historic Ritz Theatre in downtown Greenville.

“This is the 13th edition of POTR, which has become a Greenville tradition,” Nancy Idland, GAAC artistic director as well as director of the annual production, explained. “For the first time, we are offering a fun and vibrant circus-themed show. Our ideas for our shows come from a lot of sources. This one actually originated with my little granddaughter. She was here for our annual summer camp week in Greenville last year and announced she knew what my show should be for next year and proceeded to sing a portion of a delightful song from a hit film with Hugh Jackman.”

While Idland said she knew the songs featured in that film, “The Greatest Showman,” would prove a distinct challenge for the cast, she and musical director David Norrell met, discussed the song selections and offered the Ritz Players opportunity to do it.

“They jumped at the chance — and I am beyond proud of them for all the hard work they have put into preparing for what is going to be a truly spectacular show.”

More than 50 cast members have been in rehearsals since January for “The Greatest Show Ever.”

Idland promises one of the most visually striking productions ever put on by the Ritz Players.

“Once again, the genius of Joni Thomas and Amy McClain shines through with their wonderful, imaginative circus-style costumes, some displaying a fun steampunk style,” Idland said. “And this year, we’ve added Pam Sexton to the mix of volunteer seamstresses creating all the garments for our 19 youth cast members.”

The song selections for this year’s POTR will take the audience down the sometimes lonely road of a carnie, Idland says.

“Although circus life can certainly be tough, the heart of a performer certainly shows through when the curtain goes up — and the show must go on, no matter the obstacles encountered.”

“The Greatest Show Ever” begins at 7:30 p.m. Thursday, Friday and Saturday nights, with doors opening at 7 p.m. General admission tickets are $20 each and now available at Sweet Heart Alabama, located directly across from the Greenville Post Office downtown.