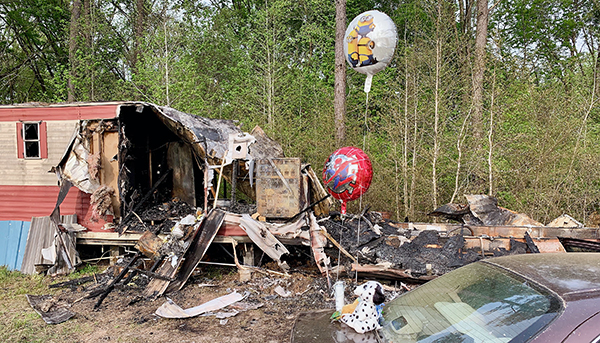 A makeshift memorial has been placed at the scene of Tuesday night's fatal fire on Prairie Lane. | Photo by Mark Rogers

Stuffed animals and balloons are part of a makeshift memorial in front of the home of a Butler County child that died Tuesday night in a fire.

Butler County Sheriff Danny Bond said his agency responded, along with several area fire departments to a home on Prairie Lane after the report of a house fire.

The identity of the child killed is not being released at this time, according to Bond.

In his weekly update, Butler County Schools Superintendent Dr. John Strycker confirmed that the child was a student at W.O. Parmer Elementary School in Greenville.

Strycker asked for the community’s prayers for the family.

“I already know that we will come together to support this family, but I ask for specific prayers for this family,” he said. “I also ask that you pray for the safety of all of our children. I believe in prayer and take this request seriously.”

Strycker asked those interested to contact W.O. Parmer Elementary School Principal Jackie Thornton to contribute anything for the family that has experienced the loss. The Greenville Advocate office, located at 103 Hickory St., will also serve as a drop off site for donations of any kind for the family. Clothing sizes and a list of essential items needed will be released on The Advocate’s Facebook page in the coming days.

“Thank you in advance for supporting our school and this family,” Strycker added.

Bond said the Butler County Sheriff’s Office has called the State Fire Marshal’s Office to assist in the investigation.

“We’re trying to determine the actual cause,” he concluded. “Its’ still under investigation.”