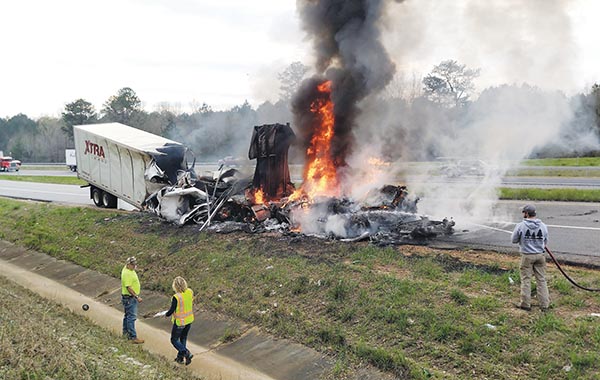 Firefighters battled a stubborn tractor-trailer fire on an exit ramp to I-65 in southern Butler County last week.

On March 8, shortly after 4 p.m., Georgiana firefighters received a call of a truck on fire on the northbound exit ramp at the 107-mile marker. The truck was engulfed in flames when firefighters arrived and the exit had to be shut down as they worked the incident.

“We had a small hazmat spill due to the water runoff from the fire,” she said. “Conway’s cleaned up the hazmat that was headed toward the creek at the county line.”

Firefighters cleared the scene at around 8:45 p.m. and the exit reopened. Drivers will notice a scorched area on the pavement where the incident took place.  Alabama State Troopers and Butler County Sheriff’s Office deputies assisted at the scene.