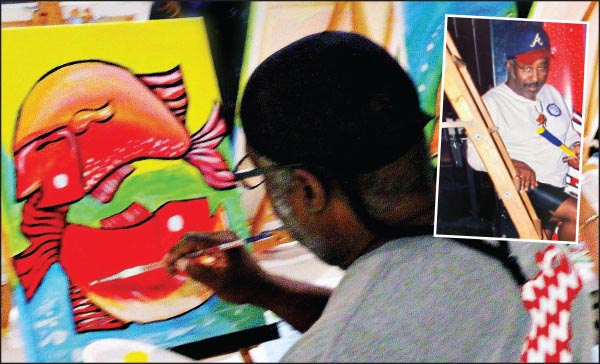 Retired City of Greenville employee Curtis Davidson is remembered for the way he could light up a room simply with his presence. The avid painter, pictured above, passed away last Wednesday following a battle with cancer. | Submitted Photos

A retired City of Greenville employee who has been described as a man who “brought a spark of light everywhere he went,” has lost his battle with cancer. Curtis Davidson, a 1975 Greenville High School graduate, passed away last Wednesday, Jan. 16. He was 61.

According to Greenville Mayor Dexter McLendon, Davidson served the City of Greenville for more than two-and-a-half decades, including many years in Parks and Recreation and a stint as the manager of the historic Ritz Theatre downtown.

McLendon recalls a man who took great pride in his work and always seemed to have a big smile on his face.

“Every time he came into City Hall, well — it’s like someone flipped on an extra light switch,” McLendon said. “The place seemed to brighten up. It’s as if you just felt better being in his presence. I know all the ladies who worked in City Hall loved him, and they loved that he continued to stop in and see them even after he retired.”

From polishing City Hall’s floors to perfection and helping set up beauty pageants at the Ritz to playing the Easter Bunny for Easter egg hunts, Davidson is remembered as a friendly, helpful and hard-working employee. He was also, friends say, a man with considerable creative talents and a real zest for life.

While in high school, Artitude on Main’s Stacey Edwards worked alongside Davidson as a lifeguard at Beeland Park.

“I’ve known him since my teen years,” she said. “Curtis ended up taking painting classes with me. He was such a special man with a sweet spirit — and so funny. I will really miss him.”

“After Curtis retired, he would often stop by and visit with me and Pat Tucker at the library,” Pearcey said. “The thing I really loved about Curtis was he said what he thought, and you could take it or leave it. I found that so refreshing. He was always so generous with his time and his talent. If Pat asked him to donate something for our annual holiday bazaar fundraiser, he was happy to provide it.”

Sometimes you didn’t even have to ask.

Christy Bozeman, who works in the City of Greenville Clerk’s Office, recalls the time she stopped by Davidson’s home to provide some printer assistance.

“While I was there, I admired a painting he had hanging on his wall — one he had painted in one of Stacey Edwards’ classes,” she reminisced. “I told him I loved it and he just took it off the wall and gave it to me. Curtis really was one in a million. I will miss his plainspoken manner, his big smile and that bellowing laugh.”

Mary McKinley, who operated the High Horse Art Gallery downtown for several years, first encountered Davidson during the early days of her career in real estate.

Both McKinley and Davidson were painting students with former Butler County resident Elizabeth Reid, before the retired Realtor opened her art gallery downtown.

“Curtis, Mary Brown and I were regulars at Elizabeth’s classes,” McKinley said. “We used to critique each other’s paintings – it was all in fun and some of the opinions were pretty hilarious. When I opened the gallery, Curtis was almost a daily visitor and we had many long conversations. I could always depend on him to come to our painting parties with Stacey Edwards at the gallery. Curtis loved his family, he loved others and he loved to create. He will certainly be missed.”

Retired City of Greenville employee Susie Winters, who treasures a photo of her posing with Davidson in his Easter bunny outfit, said it was a blessing to have known and worked with him for many years.

“He was one of a kind and so very talented and giving,” she said. “I am proud to have been a part of the City of Greenville family with a man like Curtis Davidson.”

Davidson’s longtime friend Carolyn Griffin says she only has to look around Proverbs International Christian Bookstore downtown to recall Curtis.

“My dear friend’s creativity is all around me in our store — wreaths, paintings, hand-tied bows, woodwork and decorations,” she concluded. “His presence is truly missed.”

Funeral services were held at 1 p.m. on Monday, Jan. 21, at Pine Top Church in Greenville. He was laid to rest in the church cemetery.