Another round of heavy rain expected 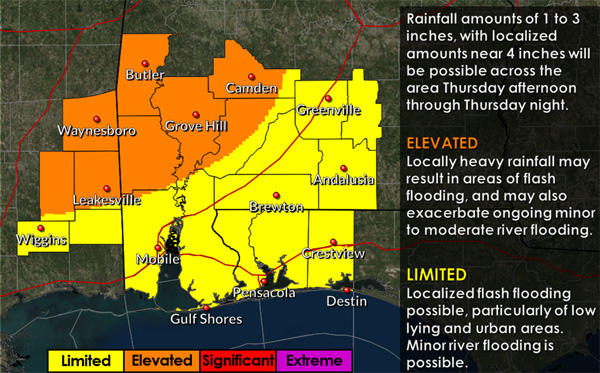 Another round of heavy rainfall will impact Butler County and surrounding areas Thursday into Thursday night ahead of the next approaching storm system and cold front.

Locally, heavy rainfall may bring some flooding concerns, especially across those areas that remain saturated from last week’s rainfall.  The potential for severe weather with this system currently looks to be very low.

The Butler County Emergency Management Agency released the report below on expected rainfall and potential hazards:

RAINFALL AMOUNTS:  1 to 3 inches of rain, with localized amounts of 4 inches look possible across the Butler County area Thursday afternoon through Thursday night as showers and a few thunderstorms spread across the ahead of the next storm system and cold front.

WHERE AND WHEN: There is an elevated threat of flash flooding across interior southeast Mississippi and southwest Alabama, where soils remain saturated from last week’s heavy rain event and minor to moderate river flooding (and localized areal flooding) continues.  The flooding threat looks more limited across the remainder of our area, though very localized flooding will be possible with heavy rains.  Locally heavy rainfall may exacerbate ongoing river flooding and we will be closely monitoring this situation over the next couple of days.  A Flash Flood Watch may become necessary if confidence in flooding increases.  It still looks like the window of heaviest rain will be Thursday afternoon through Thursday night.

Other Hazards: The severe weather threat with this system currently looks to be very low given an overall expected lack of instability.  An isolated strong to marginally severe storm cannot be entirely ruled out Thursday afternoon and Thursday night, but no severe weather outlooks are currently in effect.

Areas of dense fog will continue to impact the coast and offshore waters through this Wednesday morning. Additional patchy dense fog may re-develop over portions of Butler County tonight.