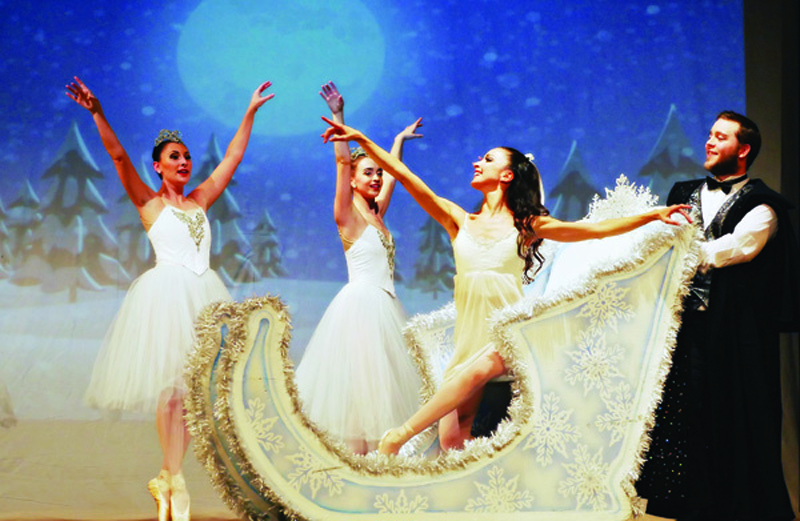 It was a first for the Camellia City. The Montgomery Ballet brought its long-renowned production of the holiday classic, Tchaikovsky’s “The Nutcracker” to town Sunday afternoon to Greenville High School’s stage.

For anyone unfamiliar with this classic production, the Christmas-centric, two-act ballet, loosely based on E.T. A. Hoffman’s “The Nutcracker and the Mouse King,” is the story of a girl who receives a nutcracker as a gift during a holiday party. The nutcracker comes to life as a dashing prince on Christmas Eve, waging a battle against the evil Mouse King – or Queen, as was the case in Saturday’s performance. In the second act, the adult Clara travels with the Nutcracker Prince to the Land of Sweets, a magical place populated by exotic dancers from across the world, not to mention a Chinese dragon, ethereal angels, beautiful flowers and more.

Initially a failure for its composer when it debuted in the early 1890s, the fantasy ballet has since become the most frequently performed of all ballets and an introduction to classical music for many young people.

Dr. John Strycker, Butler County Schools superintendent and his wife, Debra, welcomed several hundred attendees to the school auditorium Saturday afternoon. He promised that this was “only the beginning” of a collaboration between the professional ballet company and the local school system.

“I know that when I and John were in school, it was the arts which made the difference for me and for John, it was athletics,” Debra Strycker said. “But we both see the importance of having arts programs in our schools and we are committed to bringing opportunities to experience the arts and to participate in them. We already have additional performances scheduled here by the Montgomery Ballet in February and April.”

Robert Prescott, president of the Montgomery Ballet Board of Directors, was also on hand, expressing his pleasure that Greenville would now be another regular performance home for their company, along with several other small Alabama towns.

While some GMS students got the chance to experience what it’s like behind the scenes of a ballet performance, the Greenville Middle School cheerleaders actually appeared on stage with the ballet dancers, performing tumbling routines to rousing applause and cheers from the audience.

“This has been incredibly fun,” Laura Simmons, mother of GMS cheerleader Mary Ellen, who has also performed along with her mom as a member of the Ritz Players, said. “Who would have ever thought as a cheerleader she would get to take part in a professional ballet?”

State Farm Agent Abbie Ballew, one of the event sponsors, and her daughters, Julia and Kate, were on hand in the auditorium lobby before the show and at intermission, offering miniature nutcracker ornaments for donations to help fund the arts in the school system.

Following the performance, some of the cast members came back out on stage to pose for photos with some of the youngsters in the audience.

“This has been such a wonderful day for my three girls,” Christy Bozeman said.

A number of local dance students like Bozeman’s daughters attended the production, along with one of Greenville’s two professional dance instructors, Susan Andrews of Susan’s School of Dance.

“What a wonderful thing for us to be able to enjoy a professional dance performance right here in Greenville,” Andrews said.

Sonya Rice of Sonya’s Dance and Fitness was unable to attend due to prior out-of-town commitments, but said she was “so very happy to see this happen for our community, especially being a Montgomery Ballet Company alumnae.”

“I have talked with Danny about his vision and these outreach performances. I am so excited for the ballet company and for Greenville and all the communities that will be enriched by these performances,” she concluded.

The next production by the Montgomery Ballet in Greenville is expected to be the classic fairytale “Snow White” in early 2019.”