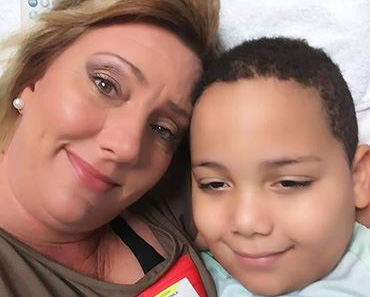 Late November into December ushers in the season of thankfulness and generosity. People often give to the charities of their choice, and serve as volunteers where needed. Giving is a good thing no matter how a person gives, but sometimes a neighbor in need can go unseen.

For Shannon Middleton, and her son Jayden, asking for help publicly hasn’t been on their agenda – until now.

Jayden, now seven-years-old, was born premature, which brought about problems later in his life.

“We had to go to Montgomery to have an emergency delivery when I went into labor with Jayden,” Middleton said. “He spent a good bit of time in the NICU, but eventually we were able to come home to Butler County. During the first year of his life he never showed any signs of the problem that would stay with him to this day.”

Jayden was nearly four-years-old before he was diagnosed with childhood intestinal failure. Since then, he and his mother have spent a good bit of time in Birmingham at Children’s Hospital.

“When we started trying to potty train I noticed something wasn’t right,” Middleton said. “Then he started talking, and said he didn’t feel anything when he needed to go to the bathroom. That’s when we went to the doctor, and found out about his condition.”

“The doctors at Children’s now think he may have a disease in his spine, which is causing the intestinal problems,” Middleton said. “Right now, he still has to wear diapers, and because of the many symptoms, and treatments he has and needs he can’t go to public school. So, he goes to Brownville Church in Conecuh County. He’s done really well there. He had to pass kindergarten and first grade last year to catch up, and was able to do so. I was so proud of him.”

Middleton is married to Jeff Blackmon who works in Georgiana. Middleton stays at home unable to work while she takes care of Jayden.

“Jayden does have insurance, but co-pays and outpatient visits are still expensive,” she said. “If Jayden gets a fever, starts having a lot of pain or starts passing blood we have to go to Birmingham immediately. Gas, food and other expenses just add up.”

Middleton started a Go-Fund Me web page to help with expenses. She said it’s helped, but more is needed.

“I’ve tried to avoid publicly asking for help, but it’s to the point that we need more,” she said. “Jayden still has to wear diapers. He wears men’s depends diapers from size large to extra large. Those run about $12 a pack. If we could just have some of those donated, that would be huge.”

“Jayden is a very happy child, and will celebrate his eighth birthday on Friday,” she said. “We will spend Thanksgiving with Jeff’s mother, and the rest of the family. I’m always blown away with how upbeat, and positive Jayden is. I hope we find out exactly what’s wrong with him as soon as possible so he can begin recovering, and start living a normal life.”