Georgiana falls to Maplesville, bows out of playoffs 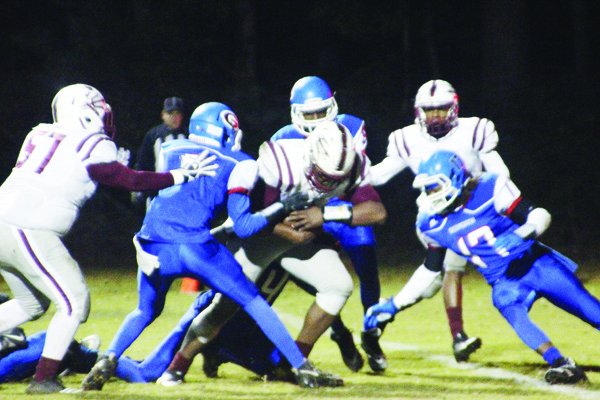 The path to a state championship is a long and winding one, which can come to end much sooner than many teams hope.

For the Georgiana Panthers, that path came to an end last Friday night against Maplesville when the third ranked Red Devils came to town and defeated the sixth-ranked Panthers 21-14, ending the Butler County team’s hopes for a Class 1A state crown.

Last week, the Panthers narrowly defeated Notasulga 41-34 to move on to the second round. Following the win, Georgiana head coach Ezell Powell admitted that his team did not play well against Notasulga.

Heading into last Friday’s contest, Powell expected an inspired effort from his team against Maplesville. That’s what he got.

In terms of Class 1A football, many high school football fans believe Georgiana vs. Maplesville is about as good as it gets. The Red Devils’ most recent state championship was in 2016 when they knocked off Pickens County 40-12 to bring home the first-place trophy.

Last season, Sweet Water knocked Maplesville out of the playoffs in the third round. Georgiana looked to exercise some demons and get passed the second round as they could not a season ago.

To start the game, the Panthers seemed as if they were a team that would not be denied a trip to the third round of the playoffs. Maplesville received the opening kickoff and on the fourth play from scrimmage, Chris Mixon picked off a Maplesville pass to set the Panthers up with good field position at the Red Devils’ 45-yard line.

It took just eight plays for Georgiana to find the end zone after a Mixon walked in for the score from three yards out. Mixon would go on to convert the extra point and take a 7-0 lead.

Maplesville wasted no time tying the game after a nine-play drive, which featured senior running back Christian Brown after rushing the ball six times for 63 yards. Brown found the end zone from 18 yards out and the Red Devils converted the extra point. With two minutes left in the first quarter, the game was tied 7-7.

It seemed like the game was going to go back and forth as both offenses looked to be firing on all cylinders, however, that was not the case. Both teams went to the locker room at the half with the score still tied 7-7.

It was the events that transpired before halftime that may have very well decided the outcome of the game.

With under a minute left until intermission, the Red Devils were backed up deep with their backs near their own goal line and lined up to punt the ball away. Georgiana’s Wesley Turner snuck through the line of scrimmage and blocked the Red Devils’ punt. Lecedric Haynes picked up the loose ball returning it to the 3-yard line.

The Panthers were poised to score right before the half; Maplesville had other plans. Mixon tried to rush in from a few yards out, but was denied. Kyle Powell then attempted to rush in, but was denied. On third down, the Red Devils sacked Mixon. Georgiana elected to go for the touchdown on fourth down, but once again was denied.

“We missed some opportunities in the game to extend our lead and just could not capitalize,” Powell said. “In a game like this, you have to make those plays and we just didn’t.”

The third quarter started with Georgiana striking first at the eight-minute mark when Kyle Powell found the end zone from 27 yards out. The extra point was converted and the Panthers led 14-7.

However, it took only three minutes for Maplesville to tie the game up once again after Brown rushed for 48 yards on six carries and capped off the drive with a 13-yard touchdown run.

“We knew what kind of a game this was going to be,” Powell said. “Both teams like to run and only throw when they need to. It was just a really hard fought game by both teams.”

Following a Maplesville fumble, the Panthers took over on offense with 10 minutes left in the game as they eyed the end zone. A touchdown may have just sealed the game for Georgiana, but Maplesville would force the Panthers to punt after seven plays.

The Red Devils took over with a little over five minutes left in the game. The 6-foot-2, 240-pound Brown put the Red Devils on his back and sealed the game with 45 yards on four carries. Brown dealt with some cramps after his fourth rush, but the Red Devils were inside the 10-yard line. Junior running back Ryan Morrow capped off the drive with a one-yard touchdown run.

Georgiana had one more shot, but couldn’t tie the game up after failing to convert on fourth down. Maplesville would go on to convert two first downs and watch as the clock struck zeroes. The Red Devils will now face Linden at home next Friday night.

“This group of seniors is a very special group and I hated to see them go out like that,” Powell said. “They’ve worked hard and embodied what we’re all about. I know that they will all go on to be great men.”

Powell ends his sixth season as the Panthers’ head coach. His overall win loss record is an impressive 55-16.

“We’re going to step back, and collect ourselves after this loss for about a week,” he said. “After that, we’ll start looking at next year, and start getting ready for another successful season.”