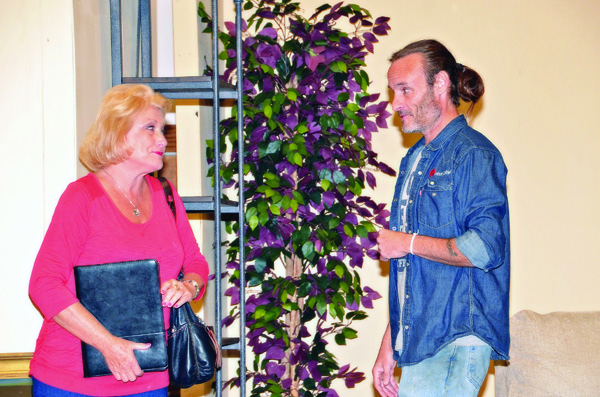 When the cast assembles this Friday night for “You Can’t Beat the House,” the latest production from the Greenville Community Theater, they will have a genuine card-carrying member of the Screen Actors Guild in their midst—a professional actor who is no stranger to many Greenvillians—Rob Mello. The performance of “You Can’t Beat the House,” will be held Friday night at the LBW Convention Center. Doors open at 6 p.m.

“One of the most exciting aspects of what promises to be a really outstanding dinner theater production is the addition of SAG/AFTRA actor, Rob Mello,” says Johnna Pitts, director of “You Can’t Beat the House.”

“Rob is a former resident of Greenville who has gone on to have a successful career as a TV/film actor. He’s graciously volunteered to perform with us to help build awareness of our group and its members. Rob’s been invaluable with advice and acting direction for the cast. We truly appreciate his friendship and professional guidance.”

Boston native Mello, who is now based in New Orleans, has several film and television projects under his belt, including “The Magnificent Seven,” “Happy Death Day,” “Fear the Walking Dead,” and Nicholas Sparks’ “The Best of Me.”

While scrolling through Facebook a few months ago, Mello happened to see the post about auditions for the upcoming GCT production. “After I read through the character descriptions, I got in touch with Johnna Pitts and asked to audition. And badabing, here I am!”

Playing a role in “You Can’t Beat the House” is a chance, he says, to hopefully encourage young people to see a career in acting—in any of the arts—is doable.

“I want to shine what little spotlight I have to show kids that an arts career is, with all its possible pitfalls, viable. One of the most incredibly sad things to me is to talk to someone and they say, “Man, I used to be good at X, and I wished I had at least tried it.’”

Like an artist he much admired in his youth—that cheerful guru of paint and canvas, the late Bob Ross—Mello says he has always found a place for art in his life.

The Boston native describes his entrance into the world of professional acting as “a happy accident.”
“I’d only done a couple of high school plays when I came across an ad on Craigslist that changed the course of my life,” Mello explains.

“A fellow was going to pay you fifty bucks and feed you to be a background actor in a SAG short he was doing . . . we were sitting over a beer at the wrap party and he told me that I might not be rich and famous, but I could make a decent living doing this. I believed him. And I took concrete steps to do just that.”

Along the way, Mello discovered every project offers its own unique set of challenges and rewards.

“You are doing what you want to be doing for a living. My friends call it the ‘Playground.’ When we are heading to set, it’s ‘another day at the playground with the kids,’ because it really is just that much fun.”

As to dealing with playing angst-ridden and/or violent characters and possibly taking home some of that negativity, Mello says it’s not a problem.

“Your job is to create a character. That’s it! You audition, show off your work, and promptly forget about it. You leave it behind when you leave that set. It sounds weird to do, but if you get too invested in every character you either like or really want to book, you will go insane,” he explains.

As to dealing with the rejection that is part and parcel of the audition process, this is Mello’s advice:

“There are literally a million reasons as to why you won’t get a part. Too tall, too short, you remind the director of his or her ex . . . no kidding. Since so much of it is out of your control, you can’t waste energy on that. Always do your best work because that’s really the only thing you can control.”

There is a certain role created by the master of horror that he’d love to claim as his own.

“Currently, I am hoping to at least get an audition for the new TV version of Stephen King’s ‘The Stand.’ I think I would make a perfect Randall Flagg.”
And one day, Rob Mello says he would like to place his hands and feet in the wet cement outside Mann’s Chinese Theater.

Pitts describes Mello and the rest of the cast of “You Can’t Beat the House” as “absolutely brilliant.”

“It’s a very funny show, and I’ve been extremely fortunate to have such a talented cast, especially for my first time out directing. Working with these guys has been very rewarding. We can’t wait for everyone to come out Friday night to LBW’s Wendell Mitchell Conference Center and enjoy a great dinner theater experience in Greenville,” says Pitts.