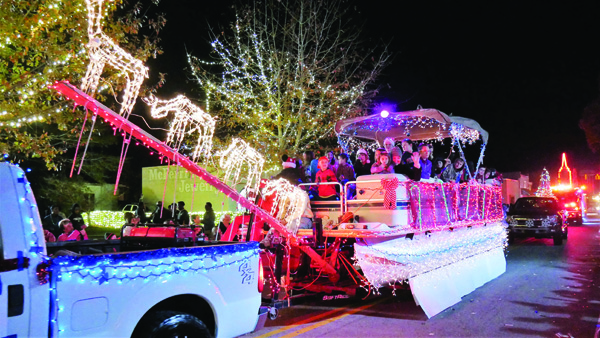 Mark your calendars for Thursday, Dec. 6 as an eagerly-awaited holiday event returns to the downtown Greenville. The Greenville Area Chamber of Commerce has slated its annual Christmas Parade to kick off downtown at 6:30 p.m. This year’s theme is “A Storybook Christmas.”

GACOC director Tracy Salter said this year’s theme was decided by members of the community.

“The parade is a community event and we wanted to get feedback from the community on this year’s theme. We had great response – we’ll have great theme ideas for years to come,” Salter said.   “This year’s parade committee narrowed the submitted theme ideas to the top three and then gave the community an opportunity to pick their top choice via Facebook – and Storybook Christmas was the top choice.”

There will also be other activities before the parade in Confederate Park, including the official lighting of the City’s Christmas tree and the opportunity to meet jolly old Saint Nick himself and get photos taken with him.

“Park festivities begin at 5:30 p.m. with pictures with Santa, followed by the annual tree lighting ceremony at 6 p.m. and the parade at 6:30 p.m.

“The parade is an annual tradition and really brings a large crowd to downtown Greenville. It’s the first Thursday in December – everyone has gotten back in the swing of things after the Thanksgiving holiday, and it’s an opportunity to come downtown to enjoy the official lighting of the tree in the park, visit with Santa, view the beautiful Christmas lights and decorations and spend time with family and friends to enjoy the parade,” said Salter.

Applications for parade entries are now available on the Chamber’s website and Salter encourages everyone to go ahead and get those forms in soon.

“It takes a crew of people to organize and put on a parade, and the sooner we get in the entry applications, the easier it is for us to streamline the process. So—don’t wait until the last minute, folks,” Salter stressed. The deadline for parade applications is Wednesday, November 21.

Since it is nighttime parade, all those entering are reminded that not only music, but also lights should be on all floats and vehicles entered.  There will be first and second place prizes for the best-decorated float and vehicle categories. Salter also stresses the importance of sticking with the theme of the parade. “This year’s theme is wonderful,” Salter said. “There are so many great Christmas stories – pick your favorite and be sure your float or vehicle entry represents the story you choose. We want to see lots of lights and colorful displays of decorations that highlight a Storybook Christmas.”

“We also want everyone to remember that safety is paramount and we require walkers on either side of the floats and vehicles entered. Having walkers in place is only way you are allowed to throw candy from your parade entry as well, and there is no additional fee for these walkers,” said Salter. “We also want to remind everyone those driving trucks, tractors, off-road vehicles or cars, must be at least 18 with a valid driver’s license.”

All vehicles parked downtown will be asked to move off Commerce St. by 5:10 p.m., to allow parade lineup and activities in the park to begin.

And there’s one more important reminder that Salter wants to stress.

“There is only one Santa, no exceptions, and he will be in the park before the parade and then on the big red fire truck at the end of the parade,” said Salter.

“We want to make sure everyone is mindful of the “Santa” rule – let’s not have any pretend Santas on or around any of the float entries.”

For more details on the upcoming parade or to request an application, contact the Greenville Area Chamber of Commerce by phone at 382-3251 or visit them online at www.greenvillealchamber.com.

Parents often find themselves asking their children, “Do you believe me now?” This question can be asked for a number... read more