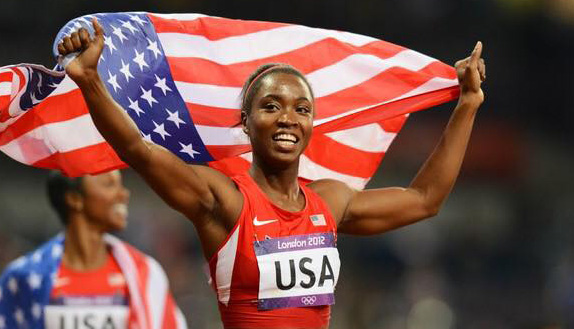 A chance meeting between Butler County Schools Superintendent John Strycker’s wife, Debbie, and a world champion track star created a one of a kind opportunity for students at Georgiana School and Greenville High School.

Tianna Bartoletta is an American track athlete from Ohio who has three Olympic gold medals to her credit. Her first gold medal came during the 2012 London Summer Olympics as part of the world record setting 4×100-meter relay team. The other two gold medals were won during the 2016 Rio Summer Olympics – one in the long jump and the other as a part of the 4×100-meter relay team. She also won first place at the World Championships for long jump in 2005 and 2015.

Debbie Strycker met Bartoletta by a twist of fate a few weeks back. Strycker said it was one of those, “God wink,” moments, which is term she went on to explain.

“Sometimes when you’re having a rough day, and nothing seems to be going your way God does something that turns it all around,” she said. “John and I have always called those moments ‘God winks.’”

Strycker said she began instructing yoga at her church nine months ago. She recently decided to try and expand the class.

“I wanted the class to be better for those taking it,” she said. “So, I decided to meet with an instructor in Montgomery. This instructor just so happened to know Tianna, and that’s how we met.”

Bartoletta lives in Europe, but has been spending time in Montgomery with a friend training. After she met with Strycker, she decided to visit some schools in Butler County.

“Most of my competitions are in Europe, Africa and Asia,” Bartoletta said. “Living in Europe makes it easier for me to travel from competition to competition. After meeting and talking with Debbie, I was more than happy to go and meet with the students she told me about.”

Last spring, Georgiana formed its very first track team. Despite having no track, or equipment, the Panthers were able to show out in the state meet. The 4×100 team placed second, Martavius Payton placed fourth in the high jump, Jamarcus Sims placed third in the triple jump, Lecedric Haynes placed second in shot put and Chris Mixon placed first in the long jump.

Bartoletta met with the Georgiana track team during her visit last week.

“I grew up in a small town in Ohio, and we didn’t have a track to run on either,” she said. “My high school was very small. We ran on pavement just like the Georgiana team, and if it was raining we ran inside through the halls. I told them that there are lots of things you can’t control. You can’t control what you’re born into, or where you’re born. What matters are the things you can control like sports and academics. I encouraged them to take advantage of open doors.”

Bartoletta met with many other students at Georgiana and Greenville with a similar message. She spent a large portion of her day meeting with students, and showing them her gold medals. There’s a possibility of her offering some coaching assistance to the Butler County track teams in the near future.

“I just can’t talk enough about how special it was to have Tianna come and visit our students,” Strycker said has she choked back tears. “It’s so important for the kids in our schools to see that you can accomplish great things if you just set your mind to it.”

BCS Superintendent Dr. John Strycker spoke highly of Bartoletta, and the possible of impact from her visit.

“Our students were very blessed to hear from a World Record Holder and three-time gold medalist, Tianna Bartoletta,” he said. “Hearing Tianna speak to the students last week also encourages me to continue to promote our Butler County Commitment which emphasizes student connection to something each young person can engage in – in a positive and passionate way.  For Tianna it was track-and-field.  For me, it was track-and-field.  For other students however, it could be art, music, drama, or a science club for example.”

“I want to personally thank Tianna for taking time from her busy schedule to talk with our young people and to encourage them,” Dr. Strycker concluded. “I also look forward to any help she can give us with our future state championship track teams at Georgiana and Greenville.”