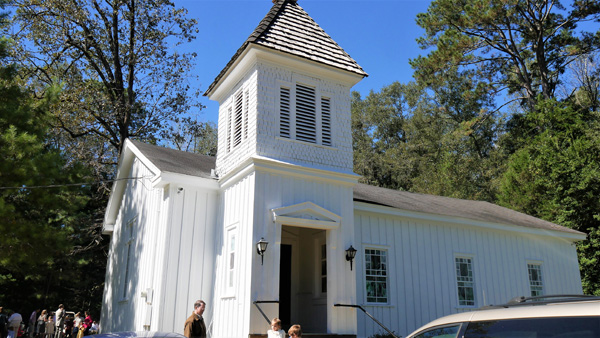 A small white wood-frame church has been standing in a quiet, verdant portion of rural Butler County for 130 years. For many, it epitomizes the house of worship in that classic hymn: “Oh, come, come, come to the church in the wildwood . . .” While the faithful in its congregation no longer meet here regularly for services, the “church in the vale” welcomes families to worship, celebrate and fellowship together during their annual homecoming service and traditional “dinner on the grounds.”

A few short months ago, an act of vandalism threatened to destroy the beloved Bolling Methodist Church.

“Neighbors had passed the church on Friday, June 29 and reported that everything looked fine,” says Mollie Pouncey of Forest Home, who has attended the church since childhood.

“There were power outages reported in the area the next day, June 30—and we are almost certain the incident happened that day.”

Unknown individuals had broken out every single pane of opalescent glass from the church’s windows. They also destroyed many of the interior light fixtures and shredded some of the church hymnals.

And their intention was clearly to do more damage to this historic house of worship.

After the BCSO deputies had investigated the incident on Sunday, July 1, and taken photos of the damage, Pouncey went and surveyed the vandals’ work for herself—and realized that, in spite of the destruction, there was a reason to give thanks.

“You could see where they tried to set four separate fires, using hymnal pages and a sheet from a decades-old Christmas pageant costume. Nothing they tried to burn would burn for them,” Pouncey said.

At first light on Monday, July 2, the crew from Ballew Builders was on the scene, covering the smashed-out windows with sheets of plywood. Pouncey and the fellow Bolling Church faithful began making plans to restore the damaged building—and hopefully, do it in time for the annual homecoming in October.

One of the biggest concerns was replacing the unusual opalescent multi-paned windows. “We began searching to try to find the same glass. We were beginning to think we’d have to install completely new windows . . . and then we uncovered a business in Indiana that had a few sheets of the exact same pattern—exactly one more than we needed,” Pouncey explained.

Another hurdle to jump—getting 100 panes of glass cut to fit in all those windows.

“We knew we’d never get them all cut in time, so we delayed our services for two weeks. And while we were at it, workers also scraped and painted the church’s exterior.”

The end result? “Our little church looks better than ever,” Pouncey exclaimed. “So many people came together to make this happen through their research, labor and monetary donations.”

And when worshippers gathered once again to celebrate faith and family in late October, they sang the praises of “the church in the wildwood” as they celebrated the blessed ties that bound them together.