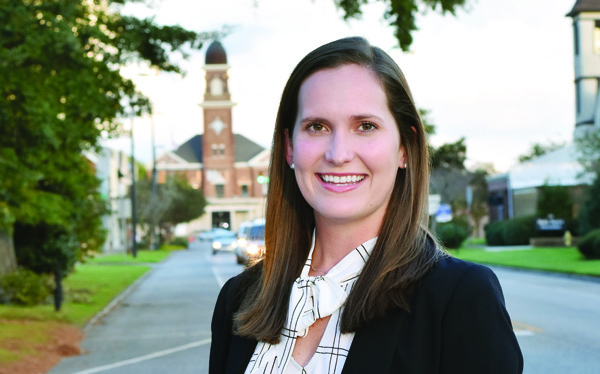 Greenville native Casey Rogers will take on a new professional role in November.

Joining the congressional staff of U.S. Rep. Martha Roby (R-Ala.) serving the Second Congressional District of Alabama, Rogers is taking yet another positive step in her professional career.

Serving Pioneer Electric Cooperative as the communications specialist since 2014, Rogers values the relationships, experience and countless memories that stemmed from this position.

“Communicating on behalf of PEC during the past four and a half years has been one of my greatest honors,” she said. “I have taken great pride and pleasure in representing the cooperative and the membership it serves.”

During her time with PEC, Rogers received many accolades at both the state and national level. From the Montgomery and Washington youth tour programs to serving as Co-op Editor of “Alabama Living” magazine, Rogers dedicated countless hours in coordinating external and internal communication efforts, along with community outreach throughout Pioneer’s South-Central Alabama coverage territory.

During this time, Rogers received numerous awards, including the statewide Darryl Gates Alabama Communicator of the Year in 2017. Her creativity with the website design, storytelling and use of digital communication also won Pioneer Electric awards at the National Rural Electric Cooperative Association’s Spotlight of Excellence Awards in 2018.

From beginning to end, Rogers has made a difference at PEC and in the many communities across the eight counties serviced. Looking back over the years, Rogers concluded, “I consider myself immensely blessed by the friendships and memories made during my time at Pioneer Electric and in Greenville, Ala.”

In a press release, PEC Vice President of Member Services Linda Horn is thankful for the time spent with Rogers over these years.

“For almost five years, we’ve been fortunate to have the best communications specialist that we’ve ever had at Pioneer Electric,” Horn said. “Casey has positively impacted our cooperative – the employees, the members and the communities we serve.”

Along with Horn, Greenville Mayor Dexter McClendon is appreciative for Rogers’ hard work at PEC and wishes her the best moving forward.

“What a wonderful opportunity Casey has in front of her,” he said. “Her professionalism will allow her to be of great service to Cong. Roby’s staff given the impact she has made at Pioneer Electric and in our city. We are excited to have a Greenvillian on our congressional team and we wish Casey much success in her career.”

At a statewide and national level, Rogers has served on the Alabama Black Belt Adventures Advisory Board, the National Energy Education Council, and is currently the Southeast Regional Ambassador for the Cooperative Communicators Association.

As Rogers steps into this position in November at the Montgomery office, Rep. Roby is looking forward to working with her newest staff member.

“Since being elected to Congress, I have made it a point to surround myself with capable, driven staff members who help me better serve the people of Alabama’s Second Congressional District,” Rep. Roby said. “Casey brings valuable experience and a strong dedication to the people of Southeast Alabama that make her an excellent addition to my team. We look forward to having her on board.”