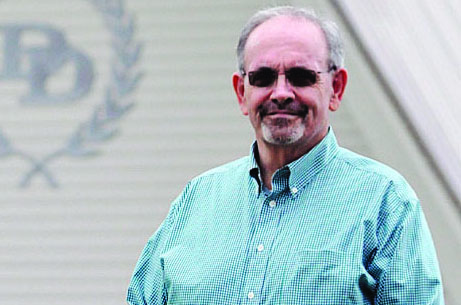 A long-time Camellia City businessman and community leader has lost his valiant battle with cancer. Don Daniels, funeral director and former owner of Dunklin and Daniels Funeral Home, died on Monday, Nov. 5 at his home. The Robertsdale native was 65.

Daniels, described by family friend Melissa Jones as “one of the nicest, most genuine individuals, who always had a smile on his face and a kind word,” found his calling in an industry to which his own family had no connection.

Intrigued by funeral rites since childhood, it was as a teenager in the 1960s that Daniels developed a strong interest in this industry and what took place behind the scenes. He said in an interview in early 2018 pertaining to his profession, “I wanted to know what goes on in that back room to help bring the loved one of someone to that point where they could have that closure.”

Daniels’ persistence paid off when he was given a job working at the Mack Funeral Home in Robertsdale in 1969. As a sort of “go-fer” for the business, Daniels did everything from washing hearses to making removals, learning the ropes of being a funeral director.

The funeral home which, due to the 24/7 nature of the industry, became Daniels’ home away from home for decades, started out as Dunklin’s Funeral Home in downtown Greenville back in 1891. At the time, the funeral home was located adjacent to what was Dunklin Hardware (now Greenville Hardware).

In July 1963, the Dunklin family moved the funeral home to its present location at 812 W. Commerce St., across from Magnolia Cemetery. In February 1992, the family sold the business to Don and Carolyn Herndon. It was then known as the Dunklin-Herndon Funeral Home. Later, the funeral home was sold to Prime Succession.

In January 2004, Don Daniels and son Damon purchased the funeral home from Prime Succession, making it a locally-owned, family-run business once again.

While the demands of working as a funeral director kept him busy, Daniels always found time to serve his community.

“Don was really proud of his involvement with our Chamber,” said Tracy Salter, executive director of the Greenville Area Chamber of Commerce.

In 2017, the GACOC honored Dunklin and Daniels Funeral Home as its Business of the Year. Salter said she was excited to be the one who presented her good friend Daniels with the award.

While he served on additional boards and committees within the community and county, it was in his role as one of Kris Kringle’s look-alike helpers for which many will most fondly remember Daniels.

“He was the face behind Santa Claus at the city’s Christmas parade for more than a decade, as well playing Santa at other events throughout the holiday season, from local business’s holiday open houses to humane society events, civic club Christmas parties and more,” Salter said. “He was truly a nice fella and he loved making others smile.”

In fact, Daniels made a point of keeping his life in balance as much as possible, saying that he learned in those long-ago days at Mack Funeral Home to leave his job behind once he exited its doors.

“Enjoy your time off, and you’ll be a much better person. You’ll end up being another number for some other funeral home by doing a lot of worrying,” Daniels explained.

A man with a strong Christian faith, Daniels saw his work as a God-given ministry and one in which he hoped to never lose a sensitive spirit and caring heart.

“My prayer has always been that if I ever get to the point where I’m desensitized to the area of calling of this ministry that we’re in, that I will know when to turn the keys over to someone else,” Daniels said, adding, “If you can’t laugh with folks or cry with folks, you are no longer going to be effective in this area of work.”

A celebration of Daniels’ life will take place at 6 p.m. Wednesday night, Nov. 7 at Southside Baptist Church with Pastor Tony Butler and Reverend Herbert Brown officiating. The family will receive friends from 4 p.m. to 6 p.m. prior to services. Private burial services will be held later in his hometown of Robertsdale.

In lieu of flowers, the family requests that donations be made to St. Jude’s Children’s Research Hospital at stjude.org.